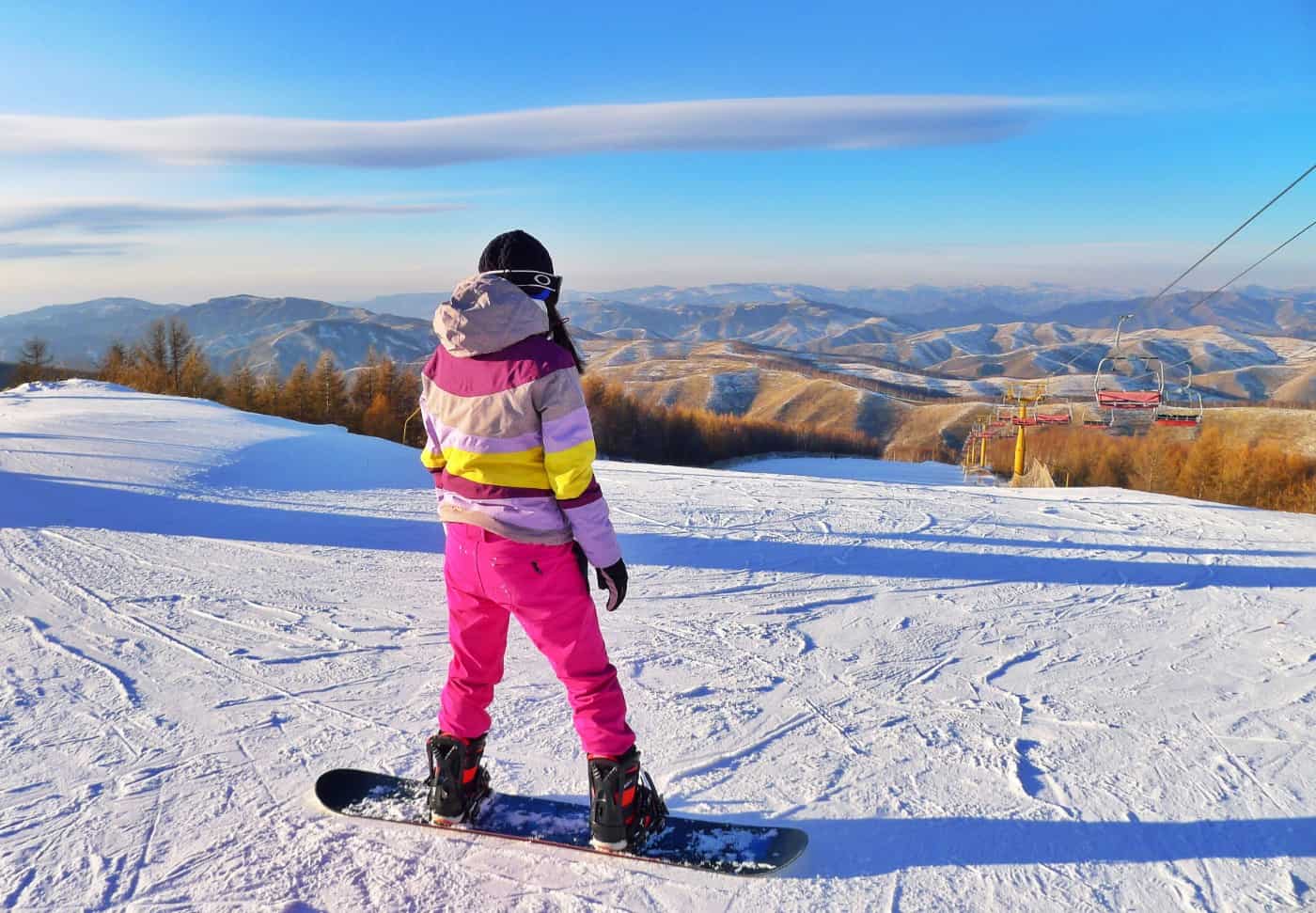 Not so fast though. Similar doesn’t mean identical. Snowboarding and skateboarding may be similar, but they are still very different.

Is Snowboarding and Skateboarding Similar? What are the Similarities

Visually, snowboarding and skateboarding are very similar. And indeed, when it comes to the basics, these two disciplines have many things in common, which allows for rather easy switching from one to another.

Let’s now overview the key similarities between skateboarding and snowboarding.

The first similarity to note between snowboarding and skateboarding is the stance. On either a skateboard or a snowboard, you are standing sideways to the travel direction.

While snowboards are longer than longboards – 55-62 inches versus 36-48 inches – your feet are set at about shoulder-width with either. Thanks to this, the balancing and stance are largely similar if you don’t take into account the wheels in a skateboard/longboard and the snowboard bindings that keep your feet fixed in place.

The basic riding skills required in snowboard and skateboard are fairly similar as well. Particularly, this applies to carving.

Carving is done in a very similar manner in either discipline – you use your entire body to initiate turns, i.e. you first turn your head, then shoulders, and finally the upper body. With both, you shift your body weight in the direction of turning.

On a skateboard, the shift in weight makes the wheels turn whereas on a snowboard, it makes the board edge to turn. In spite of this, the feel of carving is pretty darn similar between snowboarding and skateboarding, which allows for quick skill transfer from one discipline to another.

Snowboard tricks are hugely inspired by skateboarding, so you are going to find a lot of similarities here as well. There are some key differences in learning and hazards when tricking, but if you are experienced with either skateboard or snowboard tricking, carrying over to the other discipline will be a little easier, albeit not completely effortless.

The Differences Between Snowboarding and Skateboarding

Snowboarding and skateboarding are pretty close, but there are perhaps more differences between them than similarities. Well, that’s how it turned out in our material at least.

Snowboarding and skateboarding may seem the same for the untrained eye, but it isn’t how things go in reality. In fact, we’d go as far as to say that they are very different.

First of all, the learning curve has a couple of crucial differences:

Right now, it seems that skateboarding is more difficult than snowboarding. For a newbie in both disciplines, skateboarding will probably be the harder one due to the wheels, the concrete riding surface, and the need to accelerate manually.

This is not to say that snowboarding is easy or more forgiving than skateboarding though. It has its own difficulties – particularly, those related to the fixed foot position.

As mentioned above, skateboards/longboards don’t keep your feet in place by anything – you are free to position your feet in whatever way you want to find your balance or perform tricks. Snowboards, on the other hand, keep your feet fixed in bindings.

This has both good and bad sides.

On the upside, you don’t have to think about the position of your feet. You just need to ensure that the footwear sits tight on your feet and that the snowboard bindings strongly grab onto the footwear.

On the other hand, if you fall on a snowboard, then you don’t have the option to bail since your feet are fixed to the deck. You can’t assist yourself with your legs to regain your balance. So while fixed feet mean better stability at higher speeds, they also speak some serious hazards if things go wrong.

Due to this, the fixed foot position makes snowboards pretty unforgiving. In this sense, learning to balance yourself on a snowboard may be a bit more difficult to learn than on skateboard.

But once you’ve got the basics of balance on a snowboard, it will be quite easy for you to progress. One saying comparing skiing with snowboarding is quite demonstrative of this – it states that snowboarding is more difficult to learn but easier to master.

That’s because skiing is more forgiving since you have more freedom in your legs, but due to this freedom, it’s quite easy to develop a bad form. And it may take a long time for you to fix your skiing technique.

In contrast, with its unforgiving nature, snowboarding doesn’t allow serious mistakes. And that’s why once you get the hang of stability on a snowboard, there’s not too much for you to learn afterward.

While the balancing and carving basics are similar in snowboarding and skateboarding, slowing down is very different.

With skateboarding, stopping is often done through foot braking or bailing and then catching up with the skateboard. On a snowboard, stopping is similar to power sliding on a skateboard – to brake, you need to skid the board across the slope and push out.

So, stopping is one of the things that doesn’t transfer from one discipline to another.

Remember we said above that tricking was similar in skateboarding and longboarding? Well, this is true only to some extent. There are some big differences between the disciplines, and they are mostly caused by the wheels and the different surfaces.

There arguably is a wider variety of tricks available for skateboarders because your feet are free. On the other hand, this also makes performing tricks harder since your feet need to land on the board spot-on.

The factor of concrete also plays a role – failing a trick is much more painful with skateboarding than snowboarding.

Here, it could be argued that the difficulty of skateboard tricks is largely mental – the thought that a fall on concrete will hurt you may be a limiting factor for beginners.

And there certainly is some mental aspect to the difficulty of skateboard tricks – many tricks are shared between snowboarding and skateboarding, but people experienced in both will probably tell you that it’s less scary to perform tricks on a snowboard since the snow doesn’t hurt as much.

The hazards of the two disciplines are also very different since the environments aren’t the same – snowboarding takes place on steep mountain slopes, while skateboarding can be done anywhere where there is a flat concrete surface.

Little falls from a skateboard are certainly more painful – concrete is hard, and getting minor bruises and broken bones isn’t too difficult if you aren’t careful. This is going to be a bigger problem for beginners who don’t yet know how to maintain stability on a skateboard.

Snowboarding is easier on you in terms of injuries. Snow is softer, after all. With that being said, the mountain environment poses many more hazards for snowboarders than the average urban neighborhood. And the more confident you become and the more complex your tricks get, the more dangers will be waiting for you on the snowy slopes.

Advanced skateboarding can also be very dangerous – since you again get more confident in yourself and do more difficult stuff – but probably not as dangerous as snowboarding.

Skateboarding doesn’t cost too much to get into. You only need a skateboard/longboard and some safety gear, which could amount to around $300-400 or more/less depending on what you go for.

You can also practice skateboarding anywhere without having to spend any money.

In contrast, snowboarding is a much more expensive activity. You not only need a snowboard, but you also need snowboarding clothes, gloves, and goggles. Not to mention the costs associated with traveling to a mountain and the lift tickets. For beginners, the first snowboarding session may cost close to $1,000, again depending on what you buy.

Do Skateboarding Skills Transfer Into Snowboarding?

By now, you already know the main similarities and differences between skateboarding and snowboarding. And you are probably wondering if the skills from one discipline transfer into the other.

Given all of the above, the most basic skills will indeed transfer between these sports, including balancing, similar aspects of tricking, and carving. But when it comes to the more technical stuff that is more specific to that discipline, being experienced in one may not help you with the other.

Apart from that, skateboards will probably have an easier time switching to snowboarding than the other way around. As mentioned above, the basics of skateboarding are a bit more painful and difficult to learn due to the wheels, concrete, and the need to accelerate manually. Performing tricks may also be a little easier for a skateboarder since skateboard tricks are a bit more versatile and difficult.

The basics of longboarding and skateboarding are nearly identical though, so the skill transfer from them to snowboarding shouldn’t differ drastically. It’s just that longboards’ feel is more similar to snowboards, and you will probably switch from a longboard to a snowboard quicker.

Should I Snowboard or Skateboard?

Why not both? If you skateboard in summer and snowboard in winter, you will have the opportunity to stay fit throughout the most part of the year. Not only that, due to the similarities between the two disciplines, you can do cross-training in one during the off-season of the other.

You will still need to do some practice with the beginning of each season, but you won’t have to repeat everything.

Doing both snowboarding and skateboarding won’t work though if both aren’t accessible to you.

First comes your budget. It takes quite some money to get started with either discipline, but more so with snowboarding. Consider your financial capabilities first and foremost.

Snowboarding and skateboarding are very similar, but they are no less different. As such, both have their advantages and disadvantages.

Snowboarding is perhaps the cooler and more adrenaline-filled activity, but it’s not as easily accessible as skateboarding. And skateboarding, on the other hand, puts forth additional requirements for beginners.

In the end, which one to engage in will come down to your budget, preferences, and accessibility of one or the other in your area. If you can, we strongly suggest that you do both to have fun and stay in shape year-round. Otherwise, pick the one activity which is more accessible to you!

13 Fantastic Sledding Spots Near Sacramento
The 12 Best Snowboard Brands of 2023
The 8 Best Ski Documentaries You Need To See
Can You Snowboard with Glasses on? Are Contacts Better? 4 Options To Consider