You are here: Home / Fishing / Is Trout Freshwater or Saltwater? Things to Know About Trout Fishing 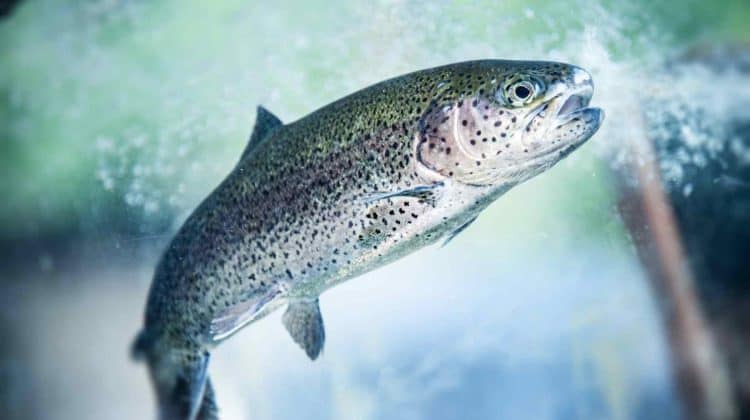 You can’t call yourself an avid angler without fishing for trout at least once. For beginners, catching trout is like the first milestone. However, is trout freshwater or saltwater? In either case, how do you catch trout?

If you don’t know, it’s okay. I’ll go over the basics of fishing trout in this article, including where to find them in the first place.

Learning how, when, and where to catch trout is undoubtedly rewarding. It’s a popular dish at many restaurants. If you live in a fishing district, you’ll be hard-pressed to find an eatery that doesn’t serve trout.

So, let’s find out more about it.

Is Trout Freshwater or Saltwater?

Trouts can be both freshwater or saltwater. In essence, you can find trouts in any body of water if it meets four requirements:

Firstly, the body has clean, unpolluted water. Like all marine species, trouts only survive if the water is clean and contaminant-free.

If your nearby water body is very polluted, it’s not likely to have many fish populations.

Secondly, the water has a rich ecosystem of microorganisms, such as aquatic insects. Trouts need to have sufficient food to survive.

Trout species have a high population in water that’s safe from predators. Consequently, trout habitats survive more in smaller bodies of water, such as ponds and lakes.

However, you can also find them in large numbers in rivers, streams, and coastlines.

Lastly, depending on the species, trouts can survive in both cold and warm water. If you’re fishing for trout in saltwater bodies such as the sea or ocean, you’ll find them along the coastline because it’s warmer.

As mentioned, you’ll find trout in both small and large freshwater bodies. However, what types of freshwater trouts are out there?

Unlike saltwater trouts, freshwater trouts like cold water. Therefore, they’re longer and more slender than warm water trouts. They also have more streamlined bodies to cut through the cold water.

You’ll find different types of freshwater trout all over the world. From North America and Europe to Asia, they’re common everywhere.

If you’re in North America, the most common species you’ll find are rainbow trout and brook trout.

In Europe, common species include:

Most types of freshwater trout have tiny fins near their tales. As I said, they’re wider than saltwater trout. That’s why they’re more sought-after by fishers and anglers.

Many countries like the US have hatcheries specifically for freshwater trout. Rainbow trout are some of the most desirable fish in the industry. You can identify them by the pink stripe on their bodies.

These can weigh up to 50 pounds apiece. Therefore, you can imagine why these are so desirable.

Similar to freshwater trouts, saltwater trouts have high populations in areas with more food. They mostly subsist on diets of crustaceans. Therefore, if there are many types of shrimp, crab, lobster around, you’ll likely find many trout species too.

Spotted sea trout is the most common type of saltwater species. They’re found in many countries.  These live on top of water columns, near the coastline.

Commonly, they only grow up to 400 mm long and weigh five pounds.

You can identify spotted sea trouts through their silver skin and the dark spots littered on their bodies. Overall, they’re unrelated to freshwater trout species.

Other types of sea trout include:

Yes, some rainbow trout might also be saltwater fish. Rainbow trouts migrate a lot, meaning they can also spend time in oceans or large lakes.

Saltwater rainbow trouts are bigger than freshwater ones. Also, their pink stripes turn darker in saltwater.

Things to Know When You’re Fishing For Trout

Now, the answer to ‘is trout freshwater or saltwater’ is pretty clear. However, what do you need to know before you go fishing for trout?

For one, what do you need to bring? You can’t catch trout without the right equipment.

If you’re looking for specialized tools, you can buy streamside equipment or a nine-feet fly rod. Moreover, there are many types of fishing lines. You can decide on one based on your budget.

What bait should you use?

Typically, the most common trout baits are:

Determining the best bait for trout depends on a few things. For instance, PowerBait doesn’t always work on saltwater trouts. It works on stocked or freshwater trouts.

Secondly, if you’re looking at freshwater trouts, don’t use insects or flies. As mentioned, a freshwater trout is usually larger, and larger trouts cut these things out of their diet.

Consequently, if you’re in freshwater, use dough baits such as PowerBait. In saltwater bodies, it’s best to use imitation bait.

However, if you want a big catch, invest in your bait. It’ll be more expensive, but it can increase your chances of catching a larger fish. In such cases, you can use shrimp, small fish, worms, and large insects.

Now, depending on where you live, you need a fishing license to fish legally. It doesn’t matter whether you’re fishing for commercial or recreational purposes.

Some US states require fishers and anglers to register themselves with the US Fish & Wildlife Service.

All states have different requirements. If you want to apply for a fishing license, you need to fulfill the criteria. For example, there’s a minimum age requirement. You have to look up the age requirement in your state.

Moreover, there’s a difference between resident and non-resident licenses. If you’re fishing outside the state you live in, you’ll have to consider this.

Again, fishing depends on whether you’re fishing in a freshwater or saltwater body. In either case, you need to consider a few things.

For saltwater bodies, you must:

For freshwater fishing, you can:

If you’re fishing near a river or stream, remember that fishing with running water is different than still water. The current affects how your bait moves in the water and how quickly you can reel in a catch.

In such cases, try to mimic the river’s drift to avoid losing your bait.

Is It Okay to Fish for Trout in the Summer?

In theory, the answer is yes. You can fish for trout in the summer.

However, it’s very difficult to find trouts in the summer because as the water temperatures rise, the trouts escape to cooler areas in the water.

Consequently, it’s not easy to predict where the trouts are scattered. Unless you follow three tips, it’s likely you won’t catch anything.

What are these three tips? They’re ways to mitigate the challenges of fishing in the summer.

By following these, you can be smarter about your fishing strategies:

Firstly, it’s cooler in the early morning. Trouts are more likely to be hanging around the surface at this time. Secondly, using a thermometer will let you gauge whether there are trouts in the water or not. Trouts like water temperatures between 55 and 65 degrees.

Lastly, trouts are natural predators. By using larger and multicolored bait, you can trick them into following their aggressive nature.

With this article, I hope you’ve learned more about trout fishing, be it in fresh or saltwater. For anglers, ‘is trout freshwater or saltwater’ is an essential question because the answer changes the dynamics of fishing.

All in all, understanding trout fishing isn’t difficult. Both freshwater and saltwater trouts require different types of fishing techniques. You just need to know how both techniques work.