You are here: Home / Hiking, Walking & Running / How Long Does It Take to Climb Mount Whitney? 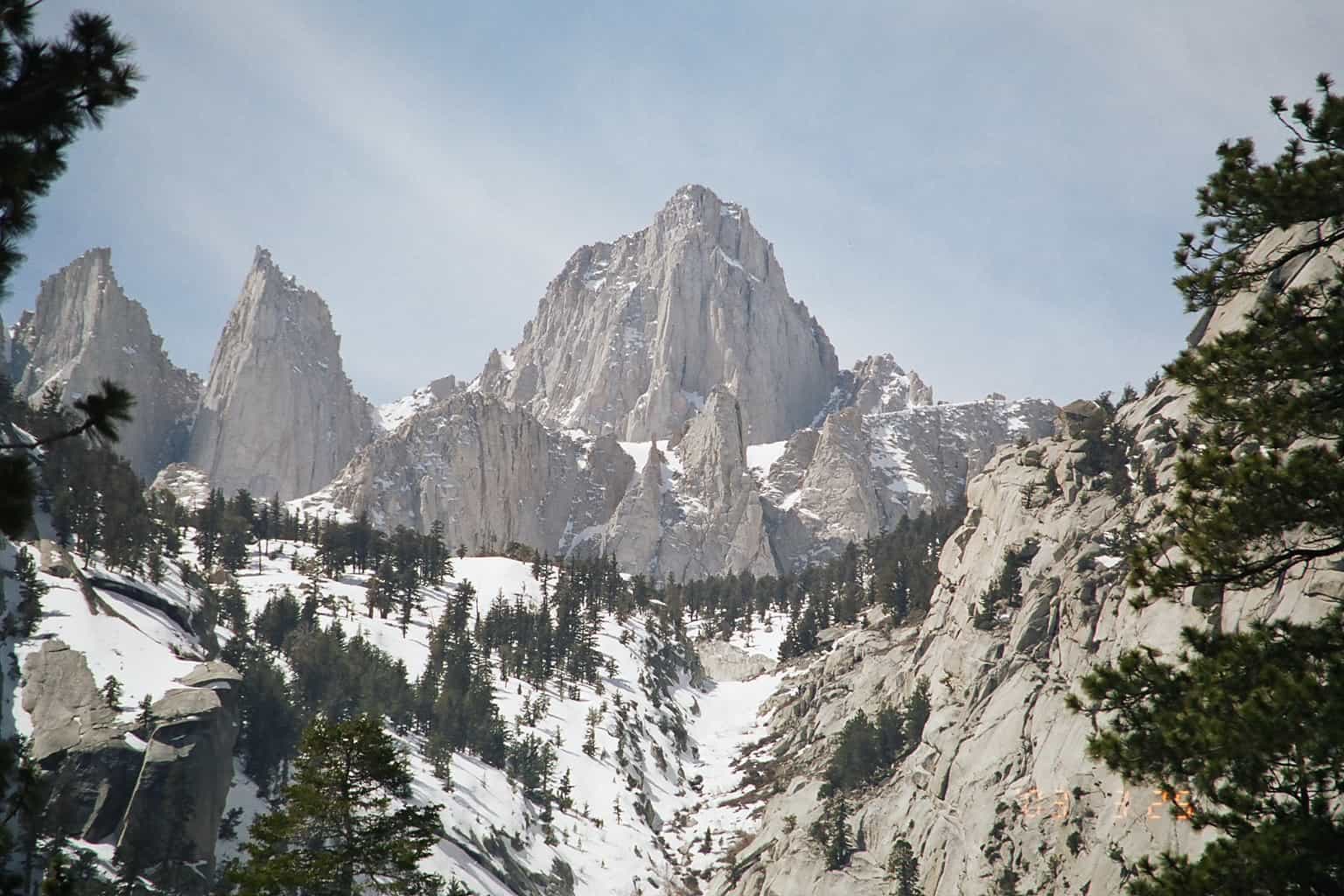 The tallest mountain in the contiguous US, Mount Whitney is a desired landmark for many hikers. Its peak situated at an altitude 14,505 feet is quite a challenge to reach, and this paired with the unparalleled views presented to you on the way up is part of the reason for the charm of this mountain.

If you want to pay a visit to Mount Whitney’s pick someday, you will need to plan ahead and free some time for the journey.

Speaking of time, how long does it take to climb Mount Whitney? This question is important since it will allow you to know beforehand how much time to dedicate to your trip.

How Long Does It Take to Climb Mount Whitney?

The short answer – it depends on which route you choose. If you didn’t know, there are a few routes up towards the peak of Mount Whitney.

If you choose the 22-mile long Mount Whitney Trail that starts at the Whitney Portal campground at an altitude of 8,300 feet, it would take you up to around half a day to reach the top of the mountain. At a fast pace, it should take you about 5 hours, 7-8 hours at a more moderate pace, or around 10 hours or more if you take it slow.

If you choose the 211-mile John Muir Trail, however, it could take about a month for you to reach the peak of Mount Whitney!

So yeah, depending on your fitness level and the trail you choose, the hike to the mount’s summit may last from a few hours to up to a month.

With that said, let’s have a more in-depth look at your hiking options and the duration of each.

There are plenty of ways to ascend to the summit of Mount Whitney, but we want to talk about the two options we mentioned above – the short Mount Whitney Trail and the challenging John Muir Trail.

While we’ll be talking just about two options, the latter actually implies many more opportunities than you may imagine since you can actually combine this hike with others!

We’ve briefly talked about this round-trip trail above. This is the easiest trail to the peak of Mount Whitney, and it’s also the most popular. It’s just 22 miles long, and it starts at an altitude of 8,300 feet at Whitney Portal. Whitney Portal is located 13 miles west of the town of Lone Pine.

The elevation gain of this hike is just 6,100 feet – since the hike starts quite high up already, there’s not much ground left for you to cover. As mentioned above, it takes from about 5 to 10 hours to get the peak of Mount Whitney, depending on your pace. The descent takes 2-3 hours shorter.

To visit Mount Whitney, you need a wilderness permit for hiking or backpacking. You may choose between a Day Use or an Overnight permit, depending on how much time you expect to spend on Mount Whitney. Keep in mind that the Day Use permit doesn’t allow you to stay on the mount overnight.

In spite of its shortness, this hike is quite strenuous, especially when covered with snow. When snow is present, mountaineering equipment and skills are required, and the trip may take longer. Since the conditions on Mount Whitney may vary, you should research how things are up there well before your trip. According to recreation.gov, the trail is usually snow-free from July to late September.

The John Muir Trail (JMT) is a 211-mile trail passing through Yosemite, Kings Canyon, and Sequoia National Parks up towards the summit of Mount Whitney. The JMT is a good option if you have plenty of time and if you don’t like the idea of the shortcut that the Whitney Portal provides.

Aside from that, the JMT allows you to see much more than just Mount Whitney.

With that said, if you just want to reach the summit of Mount Whitney, then this trail is going to be overkill. The Mount Whitney Trail is a much better option for this.

The lowest point of this trail is at 4,040 feet at Happy Isles in Yosemite Valley, and the highest point obviously is Mount Whitney’s peak at 14,505 feet. The total elevation change of the trail is around 46,000 feet, and the total descent is estimated to be around 36-38,000 feet. Paired with the length of this trail, the insane terrain throughout the trail is the reason for the unparalleled challenge of this hike.

People hike here mostly from July to September when, as mentioned above, Mount Whitney is generally free from snow – previous-year snow has already melted, while the new snow is yet to come. Well, if you were to take the hike at a snowier time, you would make your life much more difficult and the hike more time-consuming.

With that said, you can hike earlier in the season if you are up to the challenge and have sufficient gear and experience. But unless you are absolutely sure about your capabilities, we suggest that you go hiking at this trail between July and September.

According to Outside, a typical run through the JMT takes about three weeks or, as we mentioned above, around a month. In snowy seasons, you are probably going to spend much more time on the trail.

Remarkably, the fastest hike through the JMT took only two days, 19 hours, and 26 minutes. This number is completely unrealistic for people who aren’t there specifically to set records, but it’s amazing that such a long and diverse trip could be completed in such a short timeframe.

Like the Mount Whitney Hike, you need a permit to enter the JMT. A permit may be obtained from the national park or forest where you are planning to begin the hike. You may, for example, get started in Inyo National Forest. For trips ending at Mount Whitney, the permit needs to specify the exit date and exit point.

With that said, you may actually access the JMT from any of the campgrounds or national parks that are adjacent to the trail. For example, you may start your journey from the Onion Valley just 36 miles to the north of the mount. A hike from the Onion Valley is still a challenge, but it’s much less time-consuming and difficult than the full JMT.

If you have a little more time, you may take the High Sierra Trail. 49 miles from the starting point, you may enter the JTM from this trail. And then, the summit of Mount Whitney will be in just 13 more miles.

Tips on Making Your Ascent More Pleasant and Safe

It doesn’t really matter how long a trail takes to complete – completing it comfortably and safely is much more important. With that said, let us give you a few tips to consider when planning your next trip to Mount Whitney’s summit.

The weather in the mornings tends to be calmer, particularly the winds. Well, make sure to take advantage of this! While altitude changes can sure throw you off balance, bad weather is a big reason for hikers’ failure to reach the top.

Aside from that, if you are planning to take the Mount Whitney Trail, then you need to start very early so that you can get back down before 8 PM. As mentioned above, this trail takes generally 12-14 hours to cover.

This tip applies more to the JMT trail. If you have a choice of entry points, then we suggest that you start lower.

Leave the trail early if necessary

No one is going to think bad of you if you leave the 212-mile JMT trail 50 or 100 miles in. It’s a very challenging trail, and you need to be quite fit already to make it up towards the Mount Whitney summit. Do not push yourself if you feel bad – things could end much worse if you don’t listen to your body.

Keep in mind the lottery

Finally, be aware of the lottery that comes into play when trying to get a permit. Not everybody gets permits for the trails leading to the summit of Mount Whitney. This is done to limit the number of people on Mount Whitney. Due to the lottery, it’s also pretty difficult to plan ahead since you don’t know if you’ll be granted a permit a not.

How Long Does It Take to Hike the Appalachian Trail?
What Are The Best Walking Shoes for Men?
TAIGEL Men's Slip On Loafers Lightweight Leather Casual Walking Shoes Review
8 Life-Saving Tips to Follow Before and During Every Hike