You are here: Home / Off Road / Dirt Bike Oil Smells Like Gas? 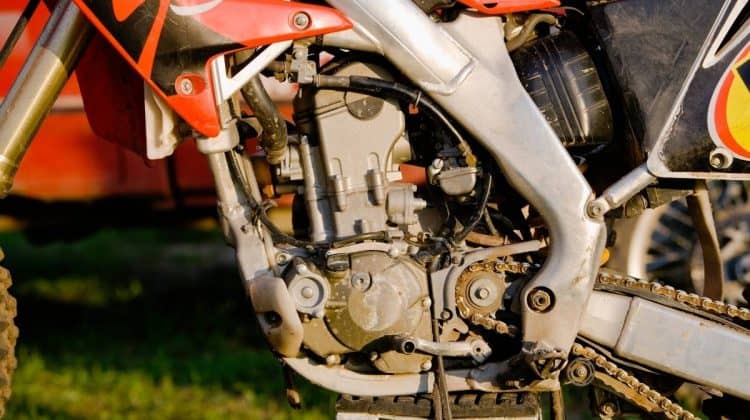 You were thinking of changing the oil in your dirt bike. When you open the oil filling bolt, there’s a sharp gas-like smell.

That is the first time you are experiencing something like this. However, dirt bike oil smelling like gas is not a rare phenomenon.

You may experience it after your bike was inoperative for some time. Why does this happen? There is a phenomenon known as oil dilution that causes your dirt bike oil to smell like gas.

What Does Oil Dilution Mean?

It means that the two types of fuels your dirt bike use got mixed.

The gas in the tank got mixed with the oil in the engine.

Is it dangerous? No, it is not if it is occasionally happening.

Your dirt bike may not show any performance dip due to oil dilution, but it can damage the bike’s engine in the long run.

If you ignore the engine oil, you may face the consequences in the form of engine damage in the long-run.

How Often Should I Change My Dirt Bike’s Engine Oil?

Experts advise an oil change for dirt bikes after every 15 hours of continuous riding.

Whenever you are about to change the engine oil, use a dipstick to smell the oil.

If the oil smells like gas, oil dilution is the reason behind it.

How Much Oil-gas Mixing Is Considered Safe?

Keep in mind that a safe limit for gas mixing in the oil is 2.5%. However, at under 2.5% gas in the engine, the engine oil never smells like gas. When it does, it means that the gas level has exceeded the safe limit, and an immediate oil change is the best bet.

What Are the Reasons for Oil Dilution?

Your dirt bike oil smells like gas. You know the reason behind the smell that it is due to oil dilution, but what exactly causes oil dilution in a vehicle? There are several reasons. Let’s take a look:

The first reason your dirt bike oil smells like gas is that you don’t ride it to its full capacity. How does it cause fuel dilution?

When the gas enters the oil pan, it is usually combusted whenever the engine runs at its full capacity.

The high engine temperature makes the gas evaporate. However, when your dirt bike does not cover optimum mileage, the engine doesn’t get at the required temperature to evaporate the gas in the oil pan.

This way, low mileage becomes a reason for oil dilution, hence the smell.

If the air to fuel ratio is not optimum according to the vehicle, there’s a high chance of fuel entering the oil pan.

Low air in the fuel can cause excessive fuel in the gas tank that, when not utilized, enters the engine, causing oil dilution.

If the fuel injector doesn’t work correctly, there’s a chance of excessive fuel entering the cylinder that the combustion chamber cannot burn. The excessive fuel will then enter the oil pan, causing it to smell like gas.

The piston rings make up a system to seal the combustion chambers and prevent any mixing of oil and gas.

The piston rings can wear out over time, causing the seal to leak. Thus the gas enters the oil pan causing the oil to smell like gas.

Confusing the Gas and Oil Chambers

It is an unlikely thing to do, but some people who use containers to fill up gas in their tanks can confuse an oil and gas container.

If they put the gas mistakenly in the engine oil section, obviously it will cause oil dilution hence the smell.

If you do not take oil change seriously and often miss it, there’s a high chance of gas build-up in the oil pan that will lead to the gas smell.

Engine misfire is characterized by a shaking vehicle. While engine misfire is not a direct cause of oil dilution, a misfiring engine denotes that it is rich for the bike. Rich fuel means that the air to fuel ratio is not optimized, and the air is less than the required level.

This will eventually lead to the fuel getting in the oil pan, and thus the smell.

How to Know That the Gas Smell Is Due to Oil Dilution?

When you smell gas from your dirt bike’s engine oil, there are a few more things you should note.

What Will Be the Consequences of Oil Dilution?

The mixing of oil and gas will not immediately cause severe damage. However, if not taken care of, the oil dilution will lead to:

As mentioned earlier, the gas build-up will lead to less viscous engine oil. This, in turn, will lead to the oil’s lubrication capacity to lower down.

Increased Rate of Wear and Tear

As the lubrication goes down, the oil will not protect the engine’s internal walls and linings, causing corrosion and damage over time.

Overheating of the Engine

A low engine oil viscosity will cause the engine to take more time to cool down. This overheating will negatively impact the internal parts of the engine if not cured in time.

If you don’t prevent oil and gas from mixing in the oil pan, it will eventually affect your fuel economy. The wastage of gas gets access to the engine instead of staying in the gas tank.

How to Prevent Dirt Bike Oil From Smelling Like Gas?

The prevention of this problem lies in only one point: proper maintenance of the dirt bike. Some tips to keep in mind to avoid the problem:

How To Charge Atv Battery?
Dirt Bike Vs Motorcycle: [Which Is Right for You?]
Who Sells Atv Helmets Near Me?
Where To Rent Atv?