You are here: Home / Boating / Guides / Can You Drive a Boat and Drink Alcohol? 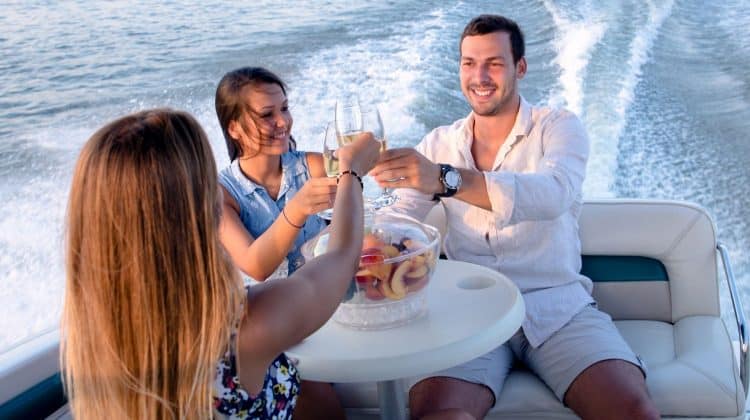 Boating and beers seem to go hand in hand. Boating for most people is a fun recreational activity. Thus, it isn’t a surprise when you’ll find most people associate boating with partying and drinking.

In such cases, where you’re looking for fun surrounded by the deep blue sea, it is easy to forget that strict rules are associated with drinking and boating.

The laws of boating while drinking are mostly similar to those of driving a car. The legal limit of alcohol concentration in blood is 0.08 g/dL. This remains true for driving a car and a boat.

Being drunk while operating a boat is a federal offense in all 50 states. However, each state judges the offense differently and has its own penalties for drunk driving in their regulated waters. We’ll be having a look at some of these penalties later.

What are the Risks You Can Face Boating While Drunk?

Boating is potentially more dangerous than driving a motor vehicle. While driving a boat or a ship, there are many factors you have to stay aware of and rules you need to comply with.

Examples include currents, tides, weather, and even other boaters. There are no lines or roads in the water to tell boaters where they can’t or can ride.

The American Boating Association published that there were 700 deaths caused by boats in 2016. Alcohol was the primary factor, which accounted for more than 15% of them.

The Coast Guard has explicitly warned that people with an alcohol concentration of 0.10% or higher are around ten times more likely to be killed in a boating accident than any sober boat operator.

What are Some of the Effects You Might Experience Being Drunk While Boating?

The combination of water in the surroundings and direct exposure to the sun can cause the alcohol to have a more significant effect on you.

Alcohol affects the central nervous system. It can cause a person to feel sluggish, sleepy, and uncoordinated.

Alcohol can affect your sense of balance, your ability to focus, and depth perception. Thus, it is generally advisable for the boat operator and everyone on the boat to abstain from alcohol consumption.

Alcohol can also make a person impulsive and cause them to take unnecessary risks. Refer to Alcohol’s Effects on the Body to learn more about how alcohol can affect you.

Other than that, there are also a few health risks associated with boating while being drunk. One of such associated health risks is hypothermia. It may come as a surprise to you, but yes, hypothermia can even occur on warm lakes.

Hypothermia is when an individual’s body loses heat at a rapid pace such that a person’s body is unable to function correctly.

There is a higher risk of falling into the water with the effect that alcohol has on balance. Once in the water, your body is at a higher risk of hypothermia because alcohol causes the blood vessels to expand, which causes faster heat loss through the skin’s surface.

What are Some of the Common Misconceptions About Boating and Alcohol?

You Can Drink On A Boat If It Isn’t A Motor-Powered Vessel.

This is a completely baseless assumption. You can get a BUI (Boating Under Influence) charge even if you are drunk while operating a canoe or a rowboat vessel.

Any sort of impairment on the water can lead to accidents. An example of this can include passing out while operating a rowboat and entering a shipping lane.

You Can Smoke Pot While Operating A Boat.

Another baseless rumor, a BUI extends to any sort of intoxication while on board. This can include both illegal and legal drugs too.

For example, you will still get a BUI even if you are caught operating a boat under the influence of prescribed medication if it is decided that the medication can cause any sort of impairment.

Boating and Alcohol Laws by State

BUI (Boating Under Influence) laws change from state to state. Unlike a car, it is not illegal to carry around alcohol on a boat with you. It is only illegal to operate a boat under its effects.

Here are some examples of state laws regarding alcohol consumption while boating:

Mississippi BUI laws state that an offender caught boating while intoxicated can face a possible loss of operating privileges, large fines, and maybe, even a felony conviction.

The Massachusetts BUI laws can make an offender face penalties of time in jail or large fines and maybe a possible loss of boating and driving privileges.

The New Mexico BUI laws state that an offender coat intoxicated while boating can face jail time or large fines and even complete a mandatory boating safety course.

The legal blood alcohol limit remains constant, i.e., 0.8% in all states. To read more on all 50 states rules and the penalties they enforce head on over to BUI Laws by State.

Keeping alcohol is not illegal while boating. Neither is consuming alcohol under specific circumstances illegal. Non-alcoholic drinks and lots of water remain better companions while boating.

In general, it is permissible to drink a standard drink or two over the course of two hours.

Should you find yourself operating a boat, it is generally advisable to give a gap of one or two hours between each standard drink. However, it is better for boat operators not to drink altogether. They should also ensure that each and every person onboard acts like an adult and drinks responsibly.

What Does Boat Insurance Cover State Farm?
Do I Need to Fog My Boat Engine?
How to Paint a Boat Trailer?
How Much Does it Cost to Re-Gelcoat a Boat?