You are here: Home / Skiing & Snowboarding / The 8 Best Ski Documentaries You Need To See 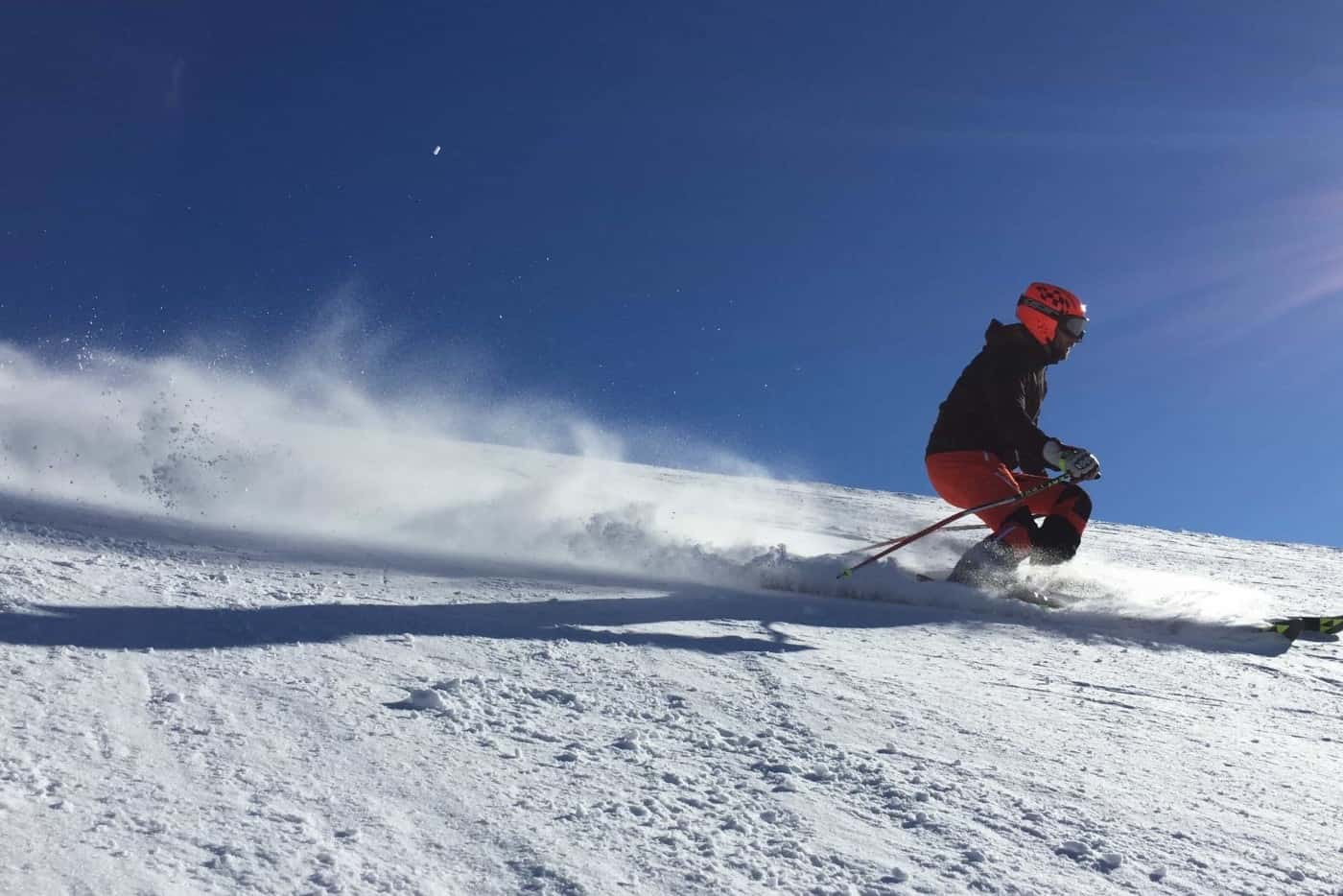 Skiing is much about skills and fun, but perhaps not everyone has thought about the behind-the-scenes aspect of this undeniably attractive athletic discipline.

At the ski resort, you and hundreds of other skiers are similar – you are here for the same goal, you have a similar set of skills, you perhaps have a similar mentality. But when it comes to the world outside skiing, people are drastically different.

This doesn’t really matter much to you as a skier and as a person, but knowing the stories of others in the skiing world can be highly inspiring and educational.

Perhaps the best source of knowledge and inspiration are ski documentaries. And while those not quite familiar with the topic may consider skiing an unappealing activity that only attracts crazy people, ski documentaries can easily shatter the doubts of even the most skeptical personalities.

And if you just love skiing, then a good ski documentary will have even more value for you.

With that being said, we want to introduce you to what we think are the 8 best ski documentaries out there. Some are inspirational, a couple are controversial, the others are weirdly sober, but they all have the potential to expand your view of skiing beyond what is happening on the mountain.

Extreme skier Shane McConkey passed far too young, but he has nonetheless managed to make a significant contribution to the world of skiing. Notably, he was a contributor to the reverse sidecut and reverse camber skis.

The documentary McConkey follows Shane, the son of skier Jim McConkey, from his childhood to becoming a professional skier and his move to extreme skiing. McConkey also covers Shane’s death during a ski base jump in 2009 and his influence that has been ongoing throughout the years even after his death.

Those familiar with Shane McConkey’s story will know how the documentary ends even before watching, but this film still manages to tell his story and examine his legacy in a beautiful way.

G.N.A.R., perhaps a controversial documentary, is a reminder that all we are doing skiing for fun.

The purpose of the game of G.N.A.R. is to score points in a designated time by earning bonuses, acquiring extra credit points (ECPs), and attempting lines. Every line in the book has an assigned numeric value, and players can earn ECPs by skiing the line butt naked (literally), giving a radness yell, cooking while waiting in the KT line, talking on a phone while skiing, and other activities that aren’t exactly allowed at ski resorts.

By this point, you should already have a good idea of what the game of G.N.A.R. is about.

In March 2010, Unofficial Squaw held a G.N.A.R. competition at the Squaw Valley resort. The competition was to last 2 weeks, as well as bring together 20 competitors and feature a take-all prize of $25,000.

After just a day of epic filming involving all the G.N.A.R. craziness, the competition was quite expectedly shut down by Squaw Valley.

The G.N.A.R. crew decided not to give up the dream and put the cash prize towards an epic road trip, with elements of the game pouring out onto the slopes of the ski resorts that the guys would pay a visit to after the failed competition. Everything was shot on film.

Coupled with commentary from a few of the area’s top pros and Shane McConkey’s best friends, the footage has become the documentary that is now known under the name G.N.A.R.

The movie comes with a few warnings of nudity, but those more open-minded should definitely have a watch of it one day. And as mentioned at the beginning, this film does remind you that we all started skiing for one reason – to have fun.

Back in the days when ski documentaries weren’t as popular as they are today, Steep has amazed its audience with its behind-the-scenes approach. This documentary shows extreme skiers as relatable people, discussing the rationale behind freeskiing beyond the adrenaline rush and extremeness.

Offering a down-to-earth overview of stuntmen, this documentary is a little sobering since many of the athletes featured in it have passed since Steep’s release in 2007.

Pretty Faces is unique in the sense that it has gone to explore the world of women’s skiing. This documentary isn’t what you may think today – it isn’t filled with clichés, it doesn’t try to romanticize female skiers, it doesn’t try to make you believe that female skiing is something that it’s not. Rather, it shows what women’s skiing is – a tough and dangerous sport, no less than male skiing.

Well, to be fair, it’s not right to separate male and female skiers – the sport is the same, it’s dangers are the same, it’s just that people are different, with their own stories and challenges.

Perhaps it is for this approach that Pretty Faces has been highly acclaimed by viewers and critics.

Swift. Silent. Deep claims to be the first true documentary about the hardcore ski bum culture in North America.

Swift. Silent. Deep tells about the Jackson Hole Air Force established by Benny Wilson and late Howie Henderson. This was a group of skiing geeks who embodied the freeskiing movement.

The “alpine outlaws” from the JH Air Force have helped revolutionize open boundaries at the Jackson Hole Mountain Resort in 1998. Boldly and stealthily, these guys have crossed the boundary ropes at Jackson Hole against the resort’s rules in search for an epic skiing experience.

The JH Air Force may seem reckless to some, but they’ve always made sure to make safe choices and looked out for each other while doing their naughty thing.

Moreover, today, they don’t secretly cross the boundary ropes – they ski right through it because it is wide open and legal. And JH Air Force has certainly had their contribution in how things have changed at Jackson Hole Mountain Resort and well beyond its territory.

It was in 1949 that Warren Miller first set out to film skiing, and over the following years, he would discover some of the sport’s most unique mountains and talents. From Switzerland to Montana, Greenland – there are very few places that Warren Miller hasn’t been in throughout his skiing and filming journey.

In Here, There & Everywhere, the film crew is revisiting some of Warren Miller’s favorite skiing locations and is chatting with renowned pros. Some of those places have become legendary skiing destinations, whereas others have become buried under the heavy snow of time.

Like a Lion tells the story of freeskier Tanner Hall.

Having engaged in freestyle skiing since the age of 10, Hall would become a seven times Winter X Games gold medalist. With that being said, his skiing career hasn’t been entirely smooth – he has suffered from severe injuries on multiple occasions, but even traumas weren’t enough to discourage Hall while he was at his career’s apex.

Like a Lion examines the behind-the-scenes controversy and sheds some light on the special courage and persistence that allows us to rise from the toughest blows.

Ski Pioneer is unlike all the ski documentaries we’ve had a look at so far.

This film has been featured a few years back at The Three Minute Film Festival in Santa Fe, New Mexico. Furthermore, it’s author Katie Leimkuehler has won Best Documentary at the festival out of 350 entries and 49 finalists!

As the title of the festival might suggest, Ski Pioneer is just a few minutes long. However, it manages to tell a brilliant story and engage its audience within its short runtime.

The documentary tells the story of author’s grandfather, Paul Leimkuehler, a speed skater who had lost his leg in the Battle of the Bulge in WWII but nonetheless returned to winter sports, becoming the US’ first amputee skier.

Given the inspirational and impactful message delivered by Ski Pioneer, no wonder that it has managed to become the documentary centerpiece during The Three Minute Film Festival in New Mexico.

10 Best Nike Ski Goggles
What is the Best Ski Resort in Utah?
Best Time To Buy Skis To Get An Outstanding Deal
The 9 Best Places To Ski Near San Francisco