You are here: Home / Off Road / Will a Dirt Bike Fit in a Ford Transit Connect? 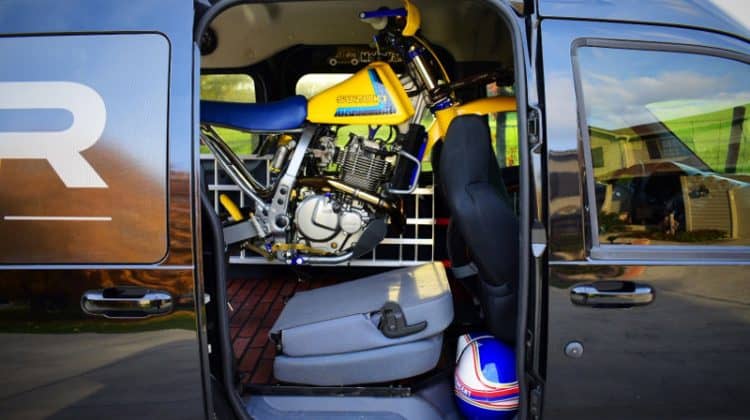 Picture this: you have just bought a brand new dirt bike and are excited to try it out. You can’t wait for the bike to carry you through every area. Suddenly, your thoughts are interrupted by one question-what if you have to carry the dirt bike to some far-fetched area?

Dirt bikes create ease in moving around. Still, you might have to transport your motorcycle using some other vehicle. It is necessary to know which vehicle can be used to handle this matter, and more importantly, will a dirt bike fit in a ford transit connection?

In this post, I will discuss the relationship between Ford Transit Connect and dirt bikes. Additionally, I will mention the essential qualities of both vehicles so you can know whether a dirt bike will fit in a ford transit connect or not.

The first product of Ford Transit’s L-series is the L1 van. Ford anticipated this vehicle to outperform its predecessor. The company estimated to get more than 20,000 registrations for it and that also for just one year.

The L1 van provides 2.9 cubic meters of load volume. You can place three meters long items in its load-through bulkhead. Also, it can easily accommodate a payload of 630kg.

The spacious design of this van makes it a suitable vehicle for carrying dirt bikes. This model can store three meters long items in a diagonal position. Also, it has extra space for placing other items.

Ford transit connect L2 was introduced in 2002. This van is quite similar to L1 in design and structure. In 2018, the van was modified and was reintroduced with improved exterior and features.

Since the L2 model is a slight upgrade to L1, there is a noticeable improvement in its key features. This model offers 3.6 cubic meters of load volume.

It can house items weighing up to 720 kg. Additionally, it comes with an optional high load modification feature, which allows you to carry 1000kg in it.

The modified structure and space storage of this van lets it carry dirt bikes conveniently. You can place 3.5 meters long items in the L2 van along with other products.

The latest version of Ford transit connect is definitely worth the hype. The changes and improvements given to this model have made it more than a pickup van. Its compact design and shape give you the freedom to drive quickly in narrow spaces.

The seating of this van is comfortable and spacious enough for seven people. It has a cargo volume of 127 cubic feet. Likewise, it can tow up to 2000 pounds, and its payload capacity is 1570 pounds.

With more than average storage space, Ford Transit Connect 2020 can carry dirt bikes. According to some professionals, it can store more than one dirt bike.

If you want to learn more about dirt bikes, then you have come just to the right place. In this section, I will be covering the relevant technical details of different dirt bikes.

This type of dirt bike is designed mainly for teenage riders. As a result, it is lightweight and super easy to handle. This bike can hold 125 cc. Additionally, it has a length of five and a half feet. It measures two and a half feet in width.

If you assumed that dirt bikes are just for adults, then you thought wrong. There are special kids dirt bikes made for 6 to 9-year-old children. These bikes can hold only 50 cc. An average kids dirt bike has a length of 50.4 inches, a width of 25.7 inches, and weighs around 137.5lbs.

Will a Dirt Bike Fit in Ford Transit Connect?

Giant, jumbo-sized bikes and dirt bikes can fit a ford transit connect but with some difficulties. Kids dirt bike is the smallest and lightest vehicle amongst all categories of dirt bikes. For this reason that you can conveniently place more than one kids dirt bike in a ford van.

How To Load a Dirt Bike in Ford Transit Connect?

I will explain basic steps to follow for safely loading a dirt bike in a ford transit connect through the following guide.

Do drain out the fuel from your dirt bike. This precautionary step will primarily lessen the fluid weight for the vehicle. Additionally, it will protect the driver from inhaling toxic fumes. Lastly, in case of any unfortunate event, a fuel-less bike won’t cause extra damage.

Transporting a dirt bike through a ford transit connect has to be done carefully. It will help if you opt to take routes that have an even surface. Avoid going on streets that are rough as it can potentially loosen the adjustment of the bike.

Take extra precautions for securing the bike. The best way is to start by wrapping it with at least four straps. Use good quality straps that are flexible and are easy to use. Make sure that the straps are tied up correctly.

Place a piece of cardboard or tarp to protect the floor of the vehicle from fluid stains. Even though you might have emptied the fuel tank, some residue might leak out.

If possible, then do place a pillow or a blanket between the bike and the van wall. This step will ensure that the bike does not rub against or cause scratches to the wall.

Most bike riders make the mistake of purchasing a bike without thinking about its portability. Luckily, dirt bike riders have an added advantage in this aspect. Also, dirt bike riders do not have to go through the trouble of hiring big trucks or vans for carrying their bike.

Dirt bikes are lightweight objects and can easily be moved in a ford transit connect. While you can rely on a ford van for transporting your dirt bike, remember that it’s a multi-purpose vehicle. Owning a dirt bike along with a ford van is indeed an ideal situation for any roadie.

What Do The 3 Numbers On Atv Tires Mean?
What Is The Width Of A Side By Side Atv?
Who Makes Eton Atv?
Are Cfmoto Atv Any Good?