You are here: Home / Archery / What Kind of Bows Are Used in the Olympics? 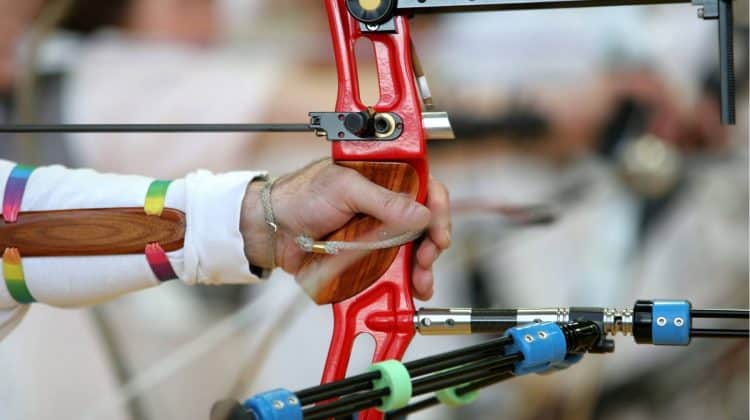 If you are a fan of archery, you already know that it is one of the most celebrated and oldest sport. With this legacy, the game is also included as a part of the Olympics. A viewer of the summer Olympics would know that the archers competing have similar bows.

If you’ve been paying attention and wondering why there is a reason behind this. The bow that these archers used is called the recurve bow. It is the only bow that can be used in the Olympics.

Read ahead to find out more about these bows.

Recurve Bows and Why They Are Used

Many archers in the Olympics use the Hoyt Prodigy Recurve Bow as their bow of choice. In the past, there have been efforts to put the compound bows back in the Olympics. These, however, have not been successful.

Olympic archery has had a rich history so far, and it has evolved for recurve bows to appear like the bow of choice. You may be surprised that recurve bows are still used in the Olympics today.

You may also ask why compound bows are not used in the Olympics. This is especially considering that compound bows have built on bows to make them more effective options today.

You may believe that the exclusionary rule is a result of tradition. However, it is much more than this and has some good logic to it. Read ahead to find out why recurve bows are used in the Olympics.

One of the main reasons compound bows are rejected in the Olympics is because they have too much power. These have been designed for hunting. This is mainly because hunting requires you to target a moving figure. A compound bow makes it easy to kill a moving figure.

Recurve bows do have a significant amount of power as well. There exist recurve bows in the market that have a draw weight of about 70 pounds that can make it rather powerful. This the same power that is used by a bow-hunter to target a deer that is medium in size.

The difference is in the cam of the compound bows. This adds a good amount of kinetic energy and speed that a recurve bow will not be able to compete with. For an archer performing at the Olympics, this power is unnecessary.

The idea here is to just get an arrow to stick to a target. This is not the case with hunters where the heart of an animal must be pierced. When used for the Olympics, a recurve bow does not need to draw weight more than about 40 to 50 pounds in all.

Shortly, compound bows will not be used in the Olympics. It may, however, happen someday, but the likelihood at present is close to negligible.

To make for fair play for each player participating in the Olympics is not a cakewalk. The Olympics is popular for hosting efficient teams from the world over. It takes a lot of work to enable all of these teams to compete in an environment that is fair.

The idea is to disallow a single team from emerging victorious due to any added advantage. This also has to do with how the televised ratings of the program always have to be high.

To ensure that the play is fair, athletes must compete genuinely. A recurve bow ensures that each player is playing with a similar bow with no undue advantage added. Hence, the organizers of the Olympics have restricted the usage of bows exclusively to recurve bows.

Access to compound bows is different across the world. Some areas may not have access to these, and others may. Hence, the best way to resolve any differences is by getting all participants a common bow. To reduce any disparity, the Olympic organizers have chosen this bow.

For instance, you will find many archers who use compound bows in the West. These include portions of North and Central America and Europe. In the East, however, compound bows are just not as popular.

Further, archers in Australia, Africa, and Asia prefer the recurve bow over other options. When all of these players who are trained with different bows meet at the Olympics, there is no common measure using which you can determine the winner.

Even if the organizers had to conclude, they would have to do so using methods that are far more complicated and time-consuming.  Players using either bow will have to be ranked separately, and a common way to rank them will have to be devised.

When the current evaluating system is logical and makes sense, it is natural that the Olympic staff would choose to retain traditional recurve bows.

What Should You Know About the Recurve Bow for Olympics?

The recurve bows that are used in the Olympics have various characteristics and parts that make them comparable to complicated weapons. This is because they come with accessories that make them efficient and add to their body.

Here are some of the accessories and parts of a bow. The accessory you are likely to notice is the stabilizer. You will see this on either side of the bow. These are long metal rods that come out of the frame of the bow.

A few archers may choose to have more than one stabilizer attached to their bows. Stabilizers add much-needed balance to the body of a bow. They work to equalize the weight of the bow in the hands of an archer.

Hence, an archer will not have to worry about the weight of the bow when they are focusing on their aim. Further, when the arrow is released, there will be shocks and vibrations. This can cause numbness in the arms of the archer.

The stabilizer will absorb all of these and will reduce any numbness that the archer may face. To absorb shock, the bows are also equipped with a plunger. This is right at rest, where the arrow is placed before it is released.

Many archers in the Olympics also choose a sight in their bow setup. They are equipment that allows an archer to line up their shot. These are often circular pieces of plastic or metal that come with internal instruments that help them do their job.

If you want to spot a bow sight, look at the frame of the bow. This is situated right above the riser and will fall parallel to the head of the archer. With this sight, you will also find a peep sight that is used alongside.

This is a tiny ring that is made of plastic or metal. It is inserted into the string of the archer’s bow so that the archer can look through each of these so that they can be lined up. With this, they can be sued to aim the arrow at the right target.

The final accessory that many Olympic archers use is called the clicker. You will see that this accessory is attached to the arrow instead of the bow itself. This clicker and spring-loaded, and it makes a clicking sound when the arrow is pulled back completely.

This noise is important to indicate to the archer that the arrow is now ready to be released. You can now go ahead and watch each archer and their bow in the Olympic games keenly. Through this, you will be able to identify these accessories on your own.

Some Popular Models of the Recurve Bow

If you are a regular watcher of the Olympics, you would have noted that most archers often use a specific bow. The brands of the bows that have to be used have not been enforced by the Olympic authorities.

However, archers choose to use a few common brands. This has been noticed across players and even countries. The most important parts of any bow are its riser and its limbs. These are specially manufactured by a few common manufacturers.

Further, you will find that the bows used today are generally takedown recurves. This means that the limbs of the bow can be detached from the riser. This can be done by unscrewing. Hence, archers do have the choice of picking the parts of their choice.

Despite this, they prefer using products that belong to Hoyt Archery. This is seen to be the popular choice for most of the Olympic medalists in archery as well. Archers tend to use Hoyt Archery for both their risers and bows.

If you are opting for risers, you can go ahead and choose the Hoyt Prodigy RX or the Hoyt GMX. These are rather popular choices and can account for close to 20% and 16% of the equipment, respectively, seen in the Olympics.

Hoyt Archery has been making these bows since 1931, and they are a trusted option for archers everywhere. Note that this is just three decades after archery was introduced to the Olympics.

You will also find that archery is a good competition to watch with difficult odds that make it interesting. If you have loved archery for a long time or want to be introduced to it, these details about the bow add to the intricate details of the game.

A recurve bow is the enforced bow for archery by the authorities at the Olympics. This has been a tradition that has been followed for a long. However, the recurve bow is also used so that the competition between archers is fair.

We have also highlighted all of the important accessories and parts of the bow that add to the archer’s experience. These help you understand the intricate details of the bow so that you can be a more informed and engaged viewer.

By making Olympic archery a priority, you will be able to make the best of the games.

Great Safety 1st Guide for Home Archery
7 Inexpensive DIY Archery Target Ideas
Brace Height In Archery - What Is It & Do You Need To Worry About It
Hoyt Vs. Mathews Bows: Which One You Should Choose?