You are here: Home / RVs / RV Accessories / Rust-Oleum Leak Seal vs Flex Seal: Which is Best? 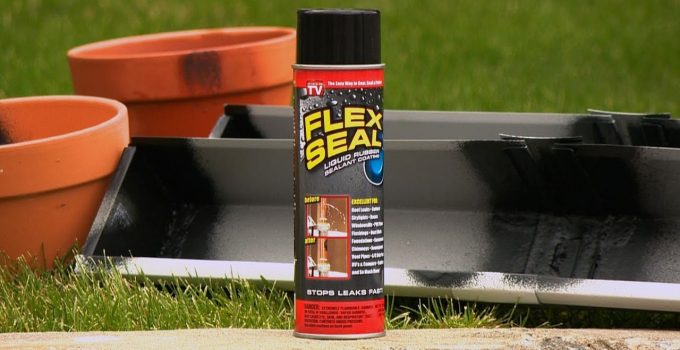 When RVing, you definitely don’t want to be caught out in the open with a sudden leak in your motorhome or trailer. You may be able to postpone solving some problems until a more convenient time, but for an urgent issue, you’d want to have a handy solution prepared beforehand.  Having the right rv supplies is a must.

When it comes to sealants, there are plenty of options on the market. The ones that are the most debated over are Rust-Oleum Leak Seal and Flex Seal. The two solutions are very similar to each other, and many people get confused when trying to choose one or the other.

But in reality, there are a few crucial differences you must know about. On today’s Rust-Oleum Leak Seal vs Flex Seal comparison, we are going to help you pick the right sealant for your problem. 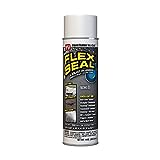 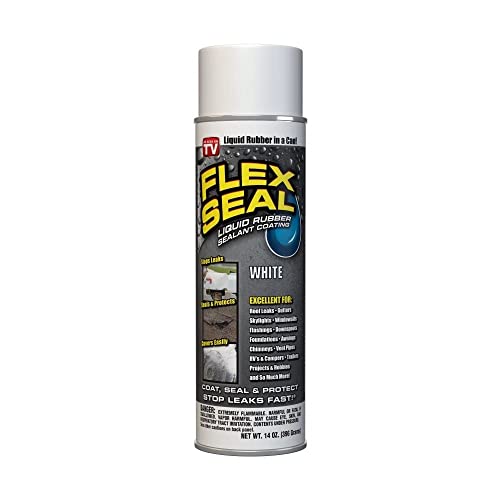 Both Flex Seal Products and Rust-Oleum offer a plentitude of sealing products, including things like sealing tapes and glues. However, we’d like to focus on their can and spray sealants today.

For both sealants, the spray and can seals are very similar, if not identical to each other. What mainly differs between them is application, available sizes, colors, as well as price.

Needless to say, the bigger the can, the longer the sealant is going to last for you. Thus, we think it is crucial that we compare the size options offered by Flex Seal Products and Rust-Oleum.

So, Flex Seal Products offers its sealants in the following sizes:

As for Rust-Oleum Leak Seal, it has the following size options:

The pricing for all of the size options – regardless of the brand – seems to be more or less the same.

It should be noted that the sizes indicated above were available as of April 2019. In the future, the offered options may change, so keep that in mind. 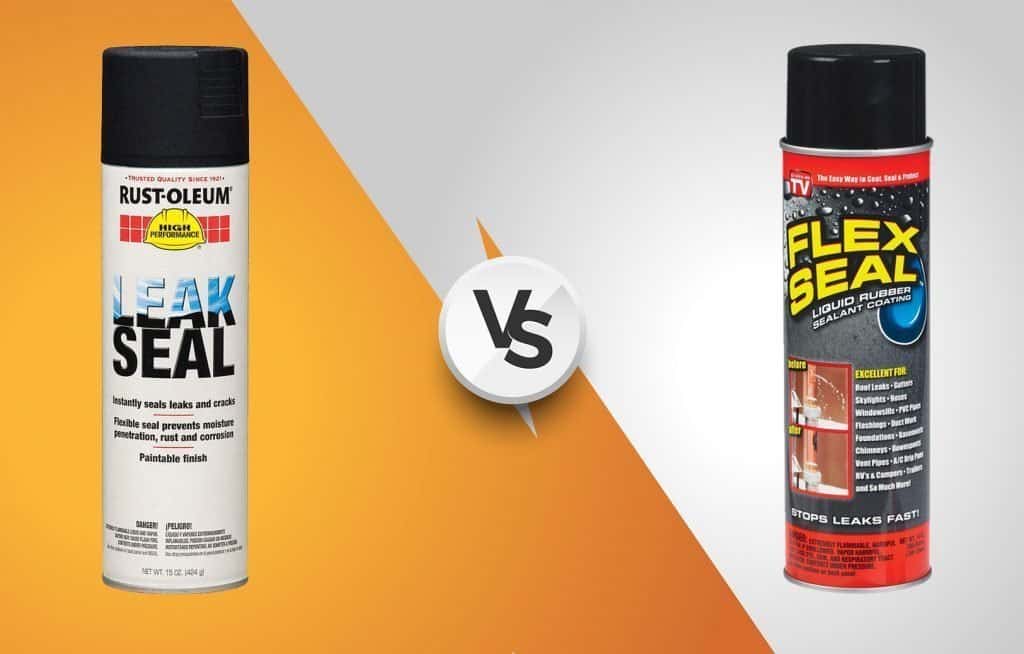 Not everybody has the desire or the time to apply the sealant and then paint over it. Aside from that, not all the sealants in question are designed to be coated with paint. With this in mind, why not choose the color you need from the get-go?

Again, this selection was available as of April 2019, so things may change as time goes on.

So, as you can see, Flex Seal has an edge when it comes to colors. However, there is a little thing in Rust-Oleum Leak Seal that actually makes up for this downside. We’ll cover this a little bit later.

In terms of application, there aren’t any major differences between Flex Seal and Leak Seal sealants. The recommendations for applications are very similar for both products.

The procedure for the sealants looks something like this:

Needless to say, to apply each sealant properly, you need to closely follow its instructions. But there aren’t any crucial differences that would impact your buying decision.

Flex Seal and Leak Seal seem to be pretty different when it comes to curing time.

As for Leak Seal, both the spray and brush sealant dry to the touch and can be recoated in 20-30 minutes. Both formulations of the sealant fully cure in around 24 hours.

All in all, it seems that Leak Seal is a better choice when it comes to quick applying of multiple coats. However, the differences in timings of Leak Seal and Flex Seal products may be explained by a variety of factors.

Maybe Flex Seal is playing it more carefully by recommending to wait 24-48 hours before applying another coat of the stuff. You can’t really know until you try the sealants out.

It should be noted that the curing time will hugely depend on air temperature, humidity, and thickness of the coating, so the sealant may get cured earlier or much later than anticipated. For example, Rust-Oleum writes that the dry and recoat times for both formulations are based on 70 degrees Fahrenheit and 50% of relative humidity.

So yeah, there are plenty of factors that play a role in the curing time – including how the manufacturer actually measured it – which is why you can’t really directly compare the products with each other.

Durability is a crucial point to consider in sealants. And here, there are some significant differences that buyers need to keep in mind.

Judging by the feedback from users, Flex Seal is less resistant to temperatures. Even though the Flex Seal is designed to withstand temperatures from -80 to 350 degrees Fahrenheit, it appears to deteriorate quickly in extremely cold and hot temperatures, due to which it may be a less suitable option for outside use.

Leak Seal, on the other hand, appears to hold together relatively well both in winter cold and summer heat. It again isn’t designed to handle extreme temperatures, but it seemingly withstands temperatures much better than Leak Seal.

So at this point, we could say that Leak Seal is a better choice for outdoor applications, while Flex Seal should be used indoors.

The same applies to Leak Seal: it can withstand pressure up to 16 psi, which is slightly higher than the atmospheric pressure. Not too much, as you can see.

In terms of water resistance, both sealants appear to be similar. They seem to be able to withstand moisture and rain, but they aren’t quite designed to withstand constant submersion in water.

Both sealants aren’t designed to be used for sealing gasoline tanks or tanks used for storage of harsh chemicals and oils. So while both can be used on materials like glass, masonry, wood, or whatnot, they can’t be used on gasoline or oil containers.

A thing that also matters in sealants quite a bit is flexibility, and it seems to be quite good in both sealants. They are designed to expand and contract in summer and winter, so mild temperature changes throughout the year shouldn’t be a problem for them.

So overall, one crucial thing that differs between the two sealants in terms of durability is their ability to withstand temperatures. Both products aren’t designed to work in extreme cold and heat, but Leak Seal seems to be more temperature-resistant than Flex Seal.

While not everyone is going to apply paint over the freshly sealed surface, some people indeed need to do this. This is especially true for outside applications where appearance does play a big role.

Well, painting over is another thing that vastly differs between the two sealants.

On their FAQ page, Flex Seal Products doesn’t recommend to paint over the Flex Seal Liquid. There aren’t any mentions about painting in the section for the spray Flex Seal, but it probably again isn’t designed to be coated in paint.

Rust-Oleum doesn’t have a FAQ page for the Leak Seal Brush for some reason, but it should also be suitable for painting over.

By the way, do you remember how we mentioned above that the Leak Seal sealant has a feature that makes up for its lack of colors? Well, its ability to take paints is the thing that we talked about.

So while there haven’t been as many color options for the Leak Seal at the moment of this material’s writing, it offers more opportunities for post-coating painting.

It should be noted, however, that this difference actually may not be that significant. Both sealants come in clear color options, so if you aren’t too perfectionist about how the treated surface works, the clear color should suffice.

In addition, if you find the proper color for the damaged surface, it probably won’t matter that much which sealant to go for.

A question that a lot of RVers are wondering about is whether the sealants can be used on water or food containers. Well, there is one answer to this question for both Flex Seal and Leak Seal – none of them is food safe, so you should not use them for sealing containers for drinking water or whatnot.

If you have water or food containers that are leaking, the best bet for you would be to go for a new container. Or you could try and find a sealant that is food-safe, but you probably won’t find one.

RUST-OLEUM LEAK SEAL OR FLEX SEAL – WHICH IS BETTER?

Now is the time to answer the question that many people are wondering about – which is better, in the end, Rust-Oleum Leak Seal or Flex Seal? Well, there are no simple answers to this question. Which one is actually good for you will depend on your needs.

Above, we’ve pinpointed two crucial differences between the sealants – temperature resistance and paints. These two will most likely be the points that you will be basing your decision on.

Rust-Oleum Leak Seal, as we’ve mentioned a bit earlier, seems to withstand heat and cold rather well. Due to this, we think that it is an overall better option for outdoor use. The ability of this sealant to be coated with paints also adds to its suitability for outdoor uses.

Flex Seal, on the other hand, doesn’t have these benefits. Thus, we think it is more suitable for indoor use and when the appearance of the repaired surface isn’t important.

If none of these two points matter to you, then your final decision may come up to other factors like price, availability, as well as whether you are using products by Flex Seal Products or Rust-Oleum.

In regards to the latter, if you are using other products by Rust-Oleum, for example, you should probably go for Leak Seal since Rust-Oleum solutions will likely work better with each other.

In the end, hopefully, we’ve provided you with a full picture of what these two sealants have to offer. But remember that it is your needs that actually play a role in your final decision.