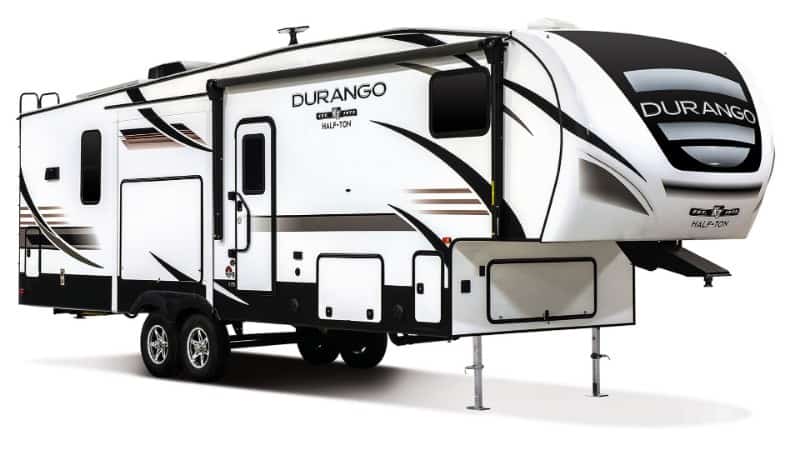 Fifth wheels tend to offer excellent comfort, but with the tradeoff of increased weight.

A total weight of 10,000 pounds isn’t a rarity among fifth-wheel travel trailers, but do you have a vehicle that could pull those 10,000 pounds?

If you are willing to sacrifice comfort for towing capability, then there are plenty of fifth wheels out there that you could choose from.

With that being said, let us introduce you to the 7 best half-ton towable fifth wheels out there that can be towed with half-ton trucks! 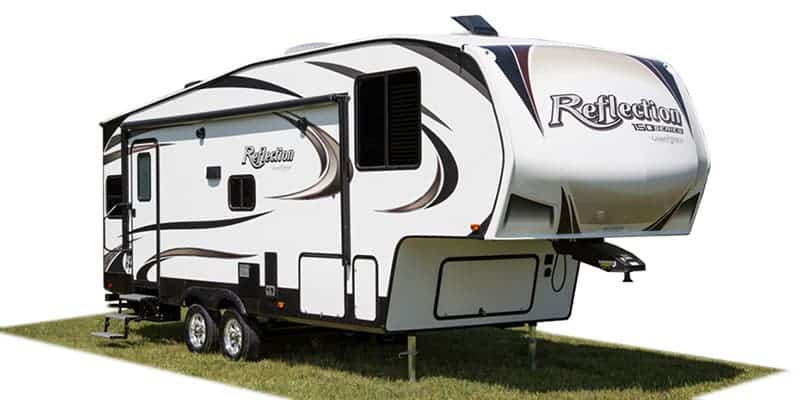 With the lowest UVW standing at 6,695 pounds, the Reflection 150 line also features the lightest fifth wheels on our list.

Reflection 150 fifth wheels are also fairly compact, with some floorplans measuring under 30 feet in length. However, if you are looking for comfort, there are a couple of bigger floorplans to choose from – 290BH & 295RL – albeit with a higher weight.

In every floorplan, you are receiving ample free room in the living area, as well as a large bedroom and full bathroom.

In bigger floorplans, you get things like the kitchen island in the 295RL or the three bunks in the rear of the 290BH.

In a few floorplans, you are also getting an outdoor kitchen with a 1.6 cubic feet refrigerator and a 2-burner stovetop.

Overall, while the floorplans of the Reflection 150 series are on the smaller side of the length spectrum, we wouldn’t say that this line lacks comfort compared to other lines that we are yet to overview.

If you have a more powerful truck and can pull in excess of 10,000 pounds, then Durango fifth wheels may interest you.

KZ has designed fifth wheels with a bit of luxury in mind. Durango RVs certainly isn’t the most luxurious fifth wheels out there, but they do feel cozy and expensive inside.

The abundance of wood elements in the interior, as well as smaller details like the porcelain toilet, are the key features that impart a sense of luxury to Durango RVs.

The floorplan sizes in the Durango fifth wheel line vary wildly, starting as low as 28 feet 11 inches and ending with 37 feet 4 inches, which is the longest on our list.

Amenities and conveniences likewise differ significantly from floorplan to floorplan. For example, in the 33 feet 2 inches long D256RKT, you are getting an outside kitchen and an outside grill. 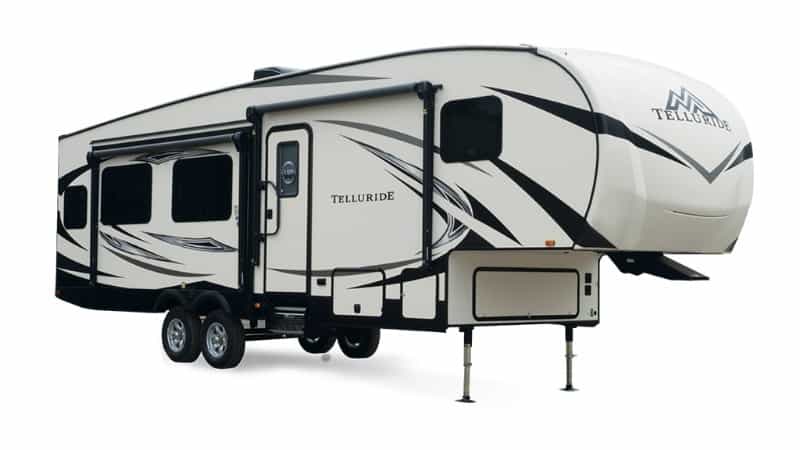 In the Telluride line, the number of sleeping spots goes up to 8 in the 296BHS and 338MBH floorplans. Not everybody needs 8 sleeping spots though, so in other floorplans, you are getting up to 4.

This means that these fifth wheels will be able to accommodate more powerful sources of electricity, allowing you to use a larger number of power-demanding appliances.

Overall, we’d say that Telluride fifth wheels offer a comparable level of comfort to that of KZ Durango fifth wheels. Moreover, Telluride RVs have a couple of advantages over Durango RVs, which we overviewed above.

On the other hand, you aren’t getting as much variety of floorplans, which may or may not be a downside for some people.

However, given that recreational vehicles can be very similar across manufacturers, it’s difficult to say whether these are the same RVs or not.

Even if they are, that’s for your benefit since you will have more options when it comes to availability and pricing. Some of the Ultra Lite line’s floorplans offer increased sleeping space, which is excellent for bigger parties.

Aside from that, you are again getting 50-amp services, allowing you to use more appliances and equipment simultaneously.

The RV sizes are also similar between the two lines. However, the floorplans in Ultra Lite don’t get as big and heavy as in the Telluride series.

If you are after a smaller and lighter fifth wheel, then you may like what Ultra Lite RVs have to offer. 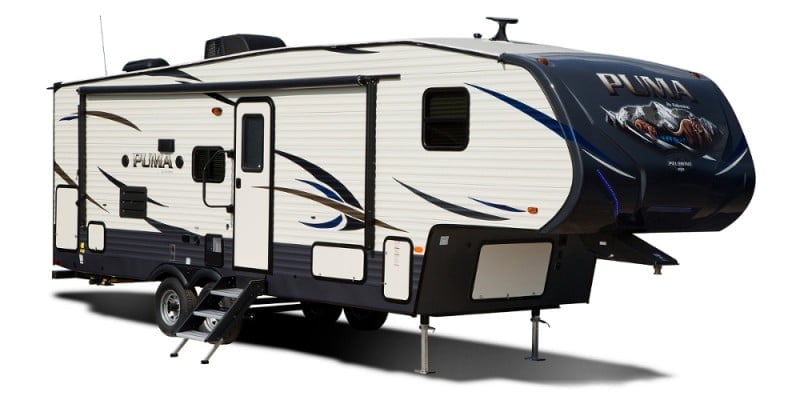 With UVW starting at 6,788lbs, the Puma line offers the second lightest fifth wheel on our list, as well as the second and third shortest (27 feet 4 inches and 27 feet 9 inches).

Not only that, but Puma RVs appear to be a little simpler than lines like the Telluride or the Ultra Lite we’ve just overviewed. Namely, Puma fifth wheels don’t have 50-amp service and outdoor kitchens, which is going to be a benefit for people who don’t need them.

On the other hand, Puma fifth wheels have a 35,000BTU furnace. You can easily install a furnace in an RV that doesn’t have it, allowing you to dwell in colder climates.

Puma RVs will probably need an insulation improvement for full-time living or extra-cold climates, but the 35,000BTU furnace is a good start nonetheless.

The sleeping capacity of Puma fifth wheels is quite nice as well, though not all of its floorplans. For example, in the 286RBSS floorplan, you are getting a queen bed plus double bunks. 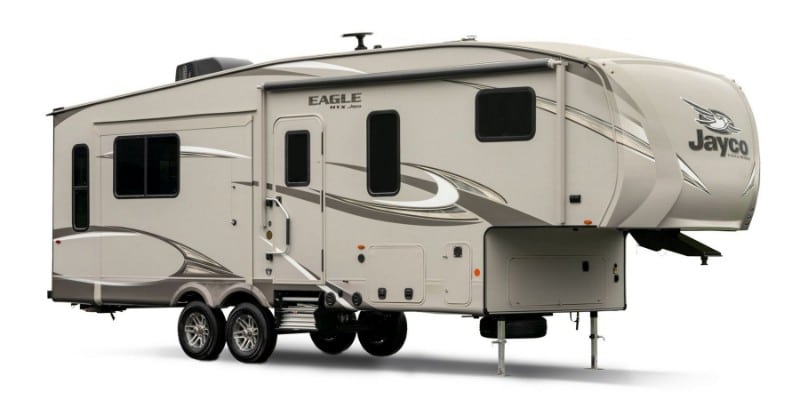 The Jayco Eagle HTX line offers mid-size fifth wheels with sub-10,000-pounds GVWR. These fifth wheels aren’t the lightest on our list, but they offer a nice balance between comfort and size.

When it comes to features, the Eagle HTX line is very similar to the Palomino Puma fifth wheel. Among the key common features are the furnace (though Jayco doesn’t specify its heat output) and the amount of sleeping space that you could get from the Eagle HTX line.

Particularly notable with sleeping space is the 26BHX floorplan which has a queen bed, two double bunks in the rear, as well a tri-fold sofa. Aside from the increased sleeping room, this floorplan has the biggest bathroom in the Eagle HTX line.

Overall, the Eagle HTX fifth wheel line is a nice option if you have a less powerful tow vehicle and want to be able to comfortably live in colder climates. 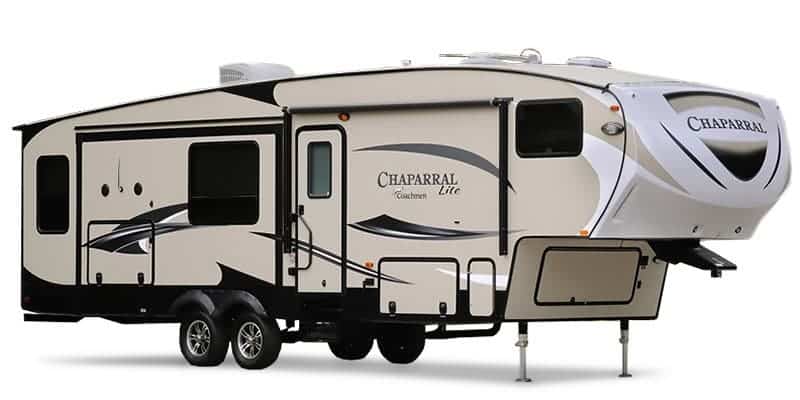 Coachmen has one thing that particularly catches the eye – a variety of floorplans. Whether you want a more compact fifth wheel or one that has more comfort in it, this line may be the one.

Want a lighter fifth wheel since you don’t have that much towing capacity? The 25MKS floorplan might be a good option.

Need extra sleeping space? Floorplans like the 295BH or the 29BH will provide you with that thanks to their bunk compartments.

Not only that, but Chaparral Lite RVs come with 50-amp service, allowing you to use more appliances at once, given that you have a proper power source.

Overall, thanks to the variety of floorplans, the Chaparral Lite fifth wheel line has many of the features that made other lines stand out, so you have a much wider choice here.

Can You Tow a Fifth Wheel with a Half-Ton Truck?

Modern pickup trucks are more capable than ever, and they can indeed pull fifth wheels.

However, this applies not to every half-ton pickup you will find out there.

Whether your truck will be able to tow a fifth wheel will depend on the towing capacity of your vehicle, as well as on the total weight of the fifth wheel.

What Weights Can Half-Ton Trucks Tow?

While many of the newer half-ton trucks can tow a fifth wheel no problem, trucks can be built very differently, impacting the actual weight they can pull.

For some perspective, have a look at the following max tow ratings:

Each truck has its tow rating, which you must keep in mind when buying a fifth-wheel trailer. You need to be aware that tow ratings, even within a single model line, can vary significantly.

7,000 pounds is a huge difference, and given that fifth wheels mostly weigh closer to 10,000 pounds, 5,500 pounds will most likely be not even remotely enough.

If your truck has a towing capacity of 12,500 pounds, it doesn’t mean that it will be able to pull any fifth wheel weighing up to 12,500 pounds.

You will also need to consider the fifth wheel’s hitch weight, which is the load that the hitch places on the truck when hitched.

To determine whether your truck will take the load of a fifth wheel’s hitch, look at its payload. Say, if your truck has a payload of 2,000 pounds, it technically will withstand hitch weights up to 2,000 pounds.

However, since the truck’s payload includes everything inside – including the passengers’ bodyweight and cargo – 2,000 pounds of the payload doesn’t mean that you can tow a fifth wheel with 2,000 pounds hitch weight.

When choosing a fifth wheel, you need to pick one with a hitch weight that would allow you to carry everything you need in your truck. If you say you need 500 pounds and your truck has 2,000 pounds of payload, the hitch weight will need to be no higher than 1,500 pounds.

To keep in mind here, you will need to consider the weight of the fifth wheel hitch receptacle in your truck. Like any other item in your truck, the hitch attachment weight also needs to be deducted from the truck’s payload.

If the hitch attachment weighs 150 pounds, you will have 150 pounds less in your payload to dedicate to the trailer hitch and everything else you will be taking with you.

The towing capacity of your truck itself is also very important. It’s no less important than hitch weight, so you need to consider both when looking for a fifth wheel.

UVW is the vehicle’s weight manufactured at the factory, usually including the full engine and generator fuel tanks and fluids. UVW typically doesn’t include the weight of cargo, dealer-installed accessories, water, propane, etc.

Dry weight is the weight of an RV with standard equipment but excluding fuel, fluids, passengers, cargo, etc.

Remember that the exact definitions of UVW and dry weight may vary from manufacturer to manufacturer, so find out how each defines these terms.

On the other hand, GVWR is the maximum weight of an RV that it should never exceed, including all cargo, passengers, accessories, the hitch, fluids, etc.

When looking for a fifth wheel, you would probably want to aim at its GVWR to be able to uncover its full potential when traveling. If you get an RV with a GVWR of 13,000, but your truck can only tow 11,500, you will be missing out on 1,500 pounds of cargo capacity in the RV.

However, if you are planning to buy a more powerful truck soon, you may go for an RV whose GVWR exceeds the towing capacity of your car just at this moment.

You may also aim at the dry weight or UVW, but you need to ensure that your truck has a few hundred extra towing capacities. Remember, these two ratings refer to unloaded RVs, which means that your truck will need to have extra capacity to tow an equipped RV, not an empty one.

You also need to consider the tow rating of your fifth wheel hitch attachment itself. The towing capacity of fifth wheel hitches usually isn’t a problem since they can often pull weights over 20,000 pounds.

Our 18 Favorite 5th Wheel Toy Haulers
How Much Does It Cost To Fit A 5th Wheel Hitch?
10 Best Built Fifth-wheels
Five Biggest 5th Wheels on the Market