You are here: Home / Off Road / Dirt Bike Vs Motorcycle: [Which Is Right for You?] 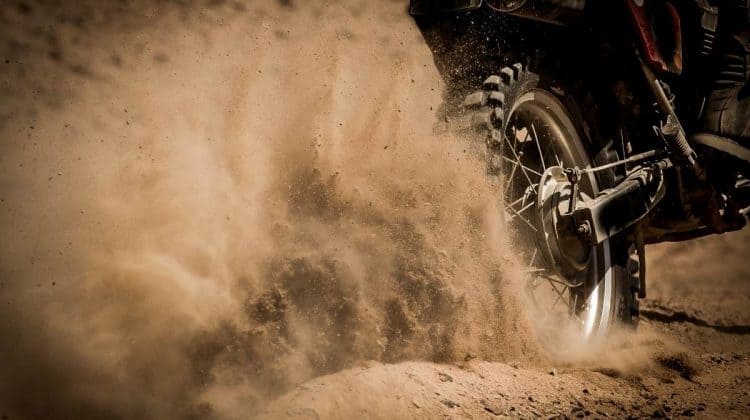 Do you see yourself on a dirt bike or motorcycle? Have you ever thought about which one fits your riding style? To make the right guess, you have to make a detailed dirt bike vs motorcycle comparison.

In this post, I have included some major differences between dirt bikes and motorcycles. Let’s find out.

What’s the Difference Between Dirt Bike and Motorcycle?

When it comes to dirt bike vs motorcycle, both are designed for different terrain. Dirt bikes can run easily on dirty roads, while motorbikes are easy to go on urban roads. Plus, they are also different in size, design, material, style, and construction.

Below are the features that set them apart:

Tire stability is one of the major discernible features. Certainly, tires can determine your bike type.

The tires of dirt bikes are extra sturdy, with empty space between treads. On the other hand, the tires of motorcycles are round, wider, and smooth. This design ensures maximum rubber exposure on the road for a firm grip.

Size draws another line of distinction between both of them. Lengthwise, dirt bikes are longer than motorbikes.

While they are lighter as they are made up of plastic or synthetic fiber, motorcycles are heavier with a metallic body. Moreover, each of the two are further categorized in terms of capacity, power, and length.

Frames of the bike will speak to the ease of taking turns. Dirt bikes have smaller and lighter frames to allow more turns. This feature makes this ride easy to control.

When it comes to motorcycles, frames are heavier and larger. They are more steady for smooth road rides.

The seating position is crucial for a comfortable ride. But it differs in both. Dirt bikes have smaller and lower seats to maximize visibility.

In comparison, Motorbikes have longer seats from the backside. This helps them to stop and relax at intervals like traffic lights.

The term suspension stands for the bike’s ability to absorb shocks. The travel suspension of dirt bikes is more than 12 inches. With spring shocks and hydraulic system, they tend to withstand rough terrain.

On the other hand, motorcycles have only a few inches of suspension.

Brakes in each model also set them apart. In terms of size and power, dirt bikes have smaller and less powerful brakes than the ones in motorcycles.

Bikers often use front brakes to stop the vehicle. In contrast, motorbikes have powerful brake rotors. As soon as bikers push the brakes, the vehicle will lock up the tires immediately.

The size of the fuel tank is another distinguishing factor. Simply, bigger tanks can hold a large amount of fuel.

Dirt bikes are made to cover smaller distances, so they need small size fuel tanks. On the other hand, motorbikes tend to cover a longer distance. For this reason, the tank size is relatively bigger to hold more fuel.

In order to understand the difference clearly, consider value chart below

Are you looking for a speedy ride? If yes, the dirt bike is not for you.

On average, the top speed of a 125cc bike can exceed 45 miles per hour. In contrast, motorcycles with the similar engine can hit about 110 mph. In traffic rules, motorcyclists have to follow speed limits.

In comparison, the price range of brand new motorcycles ranges between $5000 to $10,000, which is not too high for your first ride.

For turning ease, wheels are the deciding factors. In off-road bikes, turning ease is higher as they tend to turn with a smaller radius.

Whereas motorcycles turning radius is larger. They are quite difficult to turn at high speed.

Both rides have different categories on the basis of style.

This is another contributing factor. Dirt bikers make extensive use of the clutch, and they do so to stay in the same gear.

However, motorcycle riders use clutch occasionally. They tend to push it while shifting the gear only. Plus, they also use it during downshift.

The cost of maintaining these bikes may also vary. For dirtbikes, it may cost 4500$to 7000$ per annum. However, it may depend on the usage as well.

At the same time, the estimated cost of motorcycle repair and maintenance is 1000$ per year. This may include oil changes and chain repair.

Motorcycle Industry Council MIC saw an increase in dirt bike sale for 2020. They recorded a 53 % higher sale volume as compared to motorcycles.

According to traffic rules, dirt bikes are illegal highway rides. However, you can see a few moving on normal roads. But motorcycles are highway legal rides in many countries.

Therefore, check for road legality before you buy. You may ask suppliers as well.

The former bike types are good learning tools, although they might be challenging for beginners. But, I’d recommend dirt-biking if you want to learn to ride quickly.

What is your ride road friendliness score.? Of course, dirt bikes are the best off-road rides. They are easy to handle when you are on uneven routes.

With respect to different terrains, the steering position varies. The first type (dirt bikes) may need more steering control than the second.

Dirt bikes aren’t too easy to manipulate, thanks to their rigid steering. You’ll find it difficult to turn while riding. Conversely,  motorcyclists can take a turn easily while you’re leaning on the bike.

Which bike is the best option for heavyweight lads? Let me tell you that.

Smaller engines have a better fuel economy. Mostly, trail bikers are less fuel-efficient than street bikes. The fuel economy of a 400cc dirt bike ranges from 25 – 35 mpg when not in the race.

In contrast, the fuel economy of street bikes starts from 60 mpg. That’s far better than four-wheelers.

Do you want to get around quickly in urban traffic? If yes, dirt bikes may not be helpful.

Knobby tires tend to lower down the speed limit. At the same time, motorcycles are faster to commute between heavy traffic. So, it has a big advantage in urban traffic.

Are Dirt Bikes Safer than Motorcycles?

All you need to do is to use personal protective gear (such as the helmet). Motorcycle terrain is more dangerous as you share the road with traffic. However, you need not worry about traffic on off-road rides.

But still, the danger is there; Be careful, buddies!

To end up, both are bikes but serve a different purpose. You should go for one that suits your purpose well.

Hopefully, you find this article helpful in comparing dirt bikes and motorcycles. Now you can decide which one fits your needs. But before you go on, invest a few bucks on safety gears.

Above all, safety stands first. Never go on the road without a helmet.