You are here: Home / Boating / Why Are Anchors Shaped The Way They Are? 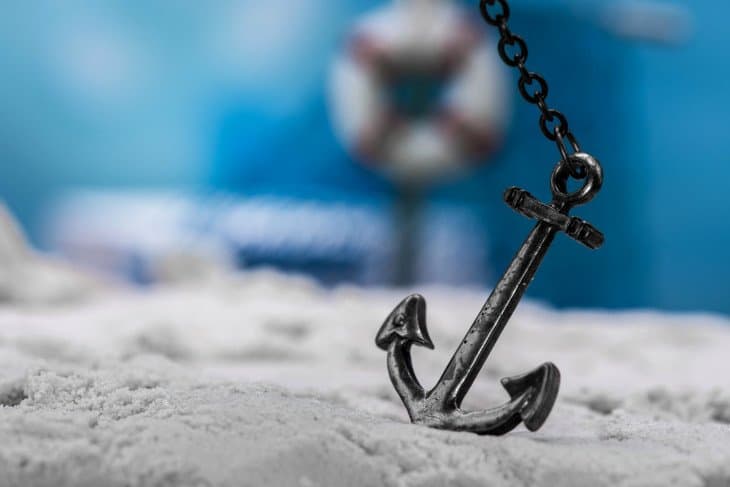 Most of us know the classic anchor shape which we have seen in movies and television. It is pretty common to keep the ship in its place with the help of this anchor. However, have you ever wondered why anchors have the shape which we have usually witnessed? We will today not only help you understand the same but also explain in detail how the anchor works and how shape plays a vital role in the functioning of the anchor.

Why are anchors shaped the way they are?

We will below go into the details of the functioning of the anchor to help you understand more.

What are the parts of an anchor?

Before we go into the detailed functioning of the anchor, it is essential to understand the parts of the anchor. These include:

The shank forms the stem of the anchor. It connects to the chain. The anchor is pulled with the help of the chain, which is attached to the shank.

The stock is the extended part of the anchor perpendicular to the ground, which helps the flukes dig into the seabed.

Tripping ring connects to the tripping line of the anchor, which can help the anchor breakout.

Flukes are an essential part of an anchor. These are the hook-shaped elements which dig into the seabed. The design of the flukes is such that while moving the anchor around, they can get stuck into the seabed quite easily. The stock can help them with the same. The number of flukes in the anchor depends on the displacement of the ship. The bigger the ship, the higher will be the number of flukes in the anchor.

Now that you are familiar with the parts of the anchor, we will explain how the anchor works and how can it keep the ship in one place.

How Does An Anchor Work

The real efficiency of the anchor lies in the chain. Typically speaking, in marine terms, one length of the anchor chain constitutes 27.5 m. If the ship is expected to encounter average weather, it has at least 5 lengths of chain more than the depth. If the maximum depth with the vessel can face is 27.5 m, under normal weather conditions it will have 5 lengths of the chain which is 137 meters of chain. Generally speaking, the weight of the anchor chain can be as high as 60 KG per meter. Additionally, the anchor weight can be in tons. It means that the chain weight, along with the flukes, can hold to the anchor in place quite easily.

If the ship is expected to encounter inclement weather, the length of the anchor chain can be10 lengths rather than just 5. It further increases the chain weight. With heavier weight, the ship can easily remain in its place even in rough waves.

The shape of the anchor can also vary according to the type of the seabed which it can encounter on its journey. However, the length of the chain is dependent on the weather which it can encounter. Thus, the next time around, you see an anchor, observe the anchor chain in view, and if it is equally sturdy; if not more, it can stabilize the ship in any weather. That is how anchors work.

The flukes of the anchors play a significant role in keeping the chain in a single place so that the ship can stabilize. Without these flukes, the ship might not be entirely stationary when the anchor is down. It is one of the main reasons why are anchors shaped the way they are.

We will now highlight some of the different types of anchors which will help you better understand why anchors sometimes vary in shape.

We will now go into different kinds of anchors. These vary in shape and size, but the basic premise is the same. The functioning of the anchors is similar irrespective of the type.

The fisherman anchor is one of the oldest types of anchors. You will often witness it on all the sailing ships. It consists of 2 flukes on either side. These flukes aim to grab rocks. In most of the cases, only a single arm grabs the rocks or penetrates the seabed. The other arm is above the seabed. It is suitable for the grassy and rocky seabed. The problem is its holding power to weight ratio is not that good when you compare it with other anchor types. That is why; the modern ships do not prefer this anchor type.

The Bruce anchor gets its name from its creator Peter Bruce. It was invented in the 1970s. It has Fluke wings which point upwards. Due to this design, it is often big as compared to the other anchors. The clawed design has superior holding power as compared to the fisherman anchor. The tips are pointed to ensure that once the anchor is deep enough into the seabed, the claws in the upper direction can keep it in place.

The Fluke anchor is the type which we explained above. It consists of a shank along with two flukes on the side. The entire assembly is connected with the help of the crown. The stock on both sides helps it go deeper into the seabed and hold the chain in place. The shank is responsible for connecting the entire anchor with the chain. The flukes have a somewhat flat design. Due to the flat design, it is easy to store and also retrieve. It is especially useful when the seabed is full of weeds and kelp. However, it performs reasonably well on hard seabeds and clay bottoms. Due to its versatility, it has become quite famous.

Grapnel anchor consists of 4 tines. The design of this anchor is such that at least one of the tines will dig into the seabed. The hooking capability of this anchor is high. However, it is difficult to retrieve. It is lightweight, and that is why; it finds applications in smaller ships. It is suitable for mud, clay, and sand seabeds.

Mushroom anchors have a different mechanism. They get their name from the mushroom-shaped bottom which they have. They do not have any tines or flukes at the bottom. They are suitable for soft bottoms. The mushroom anchors aim to create a suction power owing to which the chain will remain in its place in the ship as well. It is suitable for small sized ships which sail over a soft seabed.

These are the five anchor types which you will come across in today’s ships. Many of them are old designs, but they still work great. The size of these anchors can vary from one ship to another. It is dependent on the displacement capacity of the vessel. Similarly, the chain length can also vary, as explained above.

We will now highlight the material which the anchor uses.

What material is an anchor made of?

Most of the anchors in use today use galvanized steel. They are welded together to ensure that anchor is credible strength. The regular steel is coated with the zinc using the galvanizing process. Zinc increases its durability and minimizes the wear and tear of the anchor. It also reduces the impact of moisture on anchor. Since; an anchor is in water for a long time, it is crucial to use zinc during the construction process to minimize any wear and tear. The percentage of zinc in the anchor can vary from one type to another.

The quality of steel can vary from one anchor to another. Similarly, a lot also depends on the galvanizing process. For the larger ships, steel variants like carbon steel are in use. It provides high tensile strength. A lot depends on the size and displacement of the vessel. During the construction of an anchor, the metallurgical quality also matters a lot. If there are metallurgical defects, it can significantly reduce the life of the anchor, which will mean that it might suffer from extensive wear and tear. Hence; the material of the anchor is just one part of the equation, and the galvanizing process and the zinc content also matters a lot.

So, if you have been wondering why are anchors shaped that way? Now you will have the answer to your question. Our handy guide above will help you understand the entire functioning of the anchor and different types available. With the help of this knowledge, the next time around, you’re out at sea; you can better understand not only about the functioning of the anchor but how it can keep your ship in place.