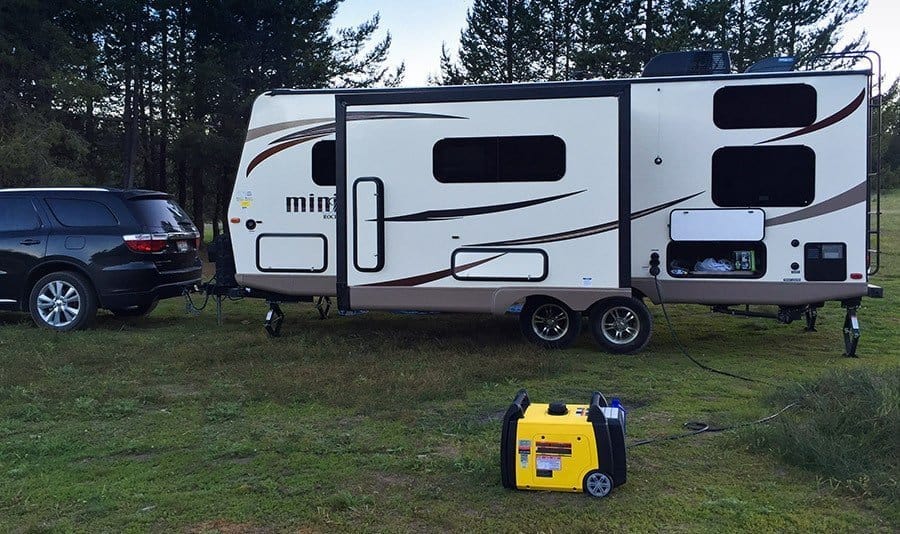 As a newbie to the RV world, there are many things you may be confused about. Among them might be the electrical service of your RV.

You probably know that RVs mostly have either 50- or 30-amp service, but what do these numbers even mean? Well, if this is the question that bothers you, we think we have the answer.

So, what size generator do you need for a 30 AMP RV? The maximum wattage a 30 AMP RV can use is 3,600 watts, anything more than this is going to waste.  However, depending on how many appliances you’re using, a 3,000-watt generator is likely sufficient.

First of all, let’s try to understand what 30-amp service in RVs even is.

Electrical systems in RVs are designed to let through only so much power, depending on their amperage and voltage. In this sense, there is a huge difference between 30- and 50-amp services.

The importance here lies in the plug of the electrical systems. Plugs in 30-amp RVs have 3 wires – one 120V wire, a neutral wire, and a ground wire. 50-amp plugs have 4 wires – two 120V, neutral, and ground wires.

An ampere can be expressed through the relationship amperage = wattage/voltage. Since we have the amperage and voltage for both 30- and 50-amp services, we can easily calculate their maximum wattage after a simple rearrangement of the formula.

While the difference between the amperages of 30- and 50-amp services may seem not that much, what they are actually capable of differs quite a bit. 50-amp service can work with over three times more power than 30-amp service!

Due to this, 30-amp service is installed in RVs that don’t have that many appliances and equipment to begin with. RV manufacturers usually offer optional 50-amp service though for those who do need the additional watts. But if you know that your power requirements are going to fit within those 3,600 watts, then there is no need for you to go for 50-amp service since it would be overkill.

While this question is a little bit off topic, we think that knowing the answer will help you understand the differences between 30- and 50-amp services better.

Well, things are pretty simple here – if you have an adapter, then you will have no problems with hooking your 30-amp RV to the campground’s 50-amp electrical system. In fact, it’s much easier to use a 30-amp RV with a 50-amp power source than the other way around.

The thing is that if you connect a 50-amp RV to a 30-amp power source, you won’t be able to use the whole potential of your RV’s 50-amp electrical system. As we’ve established above, 30-amp systems deliver much less power – 3,600 watts. And if your 50-amp RV tries to draw more than what the campground’s system can supply, the campground’s circuit breaker will just trip.

On the other hand, a 30-amp RV is never going to overload a campground with 50-amp electrical service. Your RV will not take more than 3,600 watts. And if you attempt to take more, you’ll just trip your RV’s circuit breaker.

So, as long as you have a 30-50-amp adapter, you should be able to power your 30-amp RV from a 50-amp electrical system with no issues.

What Size Generator For 30 Amp RV?

If you get a 6,000W generator, then those additional 2,400 watts will be just wasted. Not only that, but a 6,000W generator would also be a waste of money, as well as space. If you will be using a power generator only with your 30-amp RV, then there is no point in choosing a too powerful unit.

But if you will be using your generator for more power-demanding applications outside of RVing, then go for whatever wattage satisfies you. Just make sure that the generator can be throttled up and down to meet the lower power needs in the RV.

With 50-amp service, the limits aren’t as strict as in 30-amp service. A 50-amp RV still won’t take more than 12,000 watts, but the thing is that reaching those 12,000 watts isn’t a too easy thing. You need to have a plethora of powerful appliances in order to come close to this number.

Due to this, when dealing with 50-amp service, most people probably won’t even have to think about any limits. They will just have to pick whatever generator can satisfy their power needs.

This is still true with 30-amp service. You still need to consider your power needs. However, since it’s much easier to reach 3,600 watts than 12,000, you will have to be a little careful not to overshoot and get an excessively powerful generator.

Now that we know the upper limit of wattage for a 30-amp RV, let’s focus on finding out the wattage that you actually need. The limit of 30-amp service is 3,600 watts, but this doesn’t mean that you have to buy a 3,600W generator. Your power requirements may actually be lower, and why pay money for the additional watts that you don’t even need?

So, it becomes essential that you understand how many watts you actually need.

Before proceeding, let’s understand what the difference between startup and running wattages is. These are key terms that you should understand well in order to make the right choice.

At the moment of startup, any electrical device is going to draw much more power than when running.  And even though the startup power requirement is momentary, your generator needs to deliver the required power for your appliance to even turn on.

Due to this, startup wattage is more important than running wattage, and you should generally base your decision on it. However, there are some intricacies in regard to this, which we will talk about below.

Now, let’s have a look at one example. Suppose that these are the appliances that you will be using in your RV:

We’ve taken the numbers from Honda, if you are wondering.

What do you think, how many watts would you need in order to power all your stuff?

One way of calculating the required wattage is just adding up all the numbers. This way, you’ll get around 3,400 watts at startup and about 2,390 watts when running. These are reasonable numbers and are well within the 3,600W limit.

However, calculating the required wattage in this manner is going to be inefficient in most cases. That’s because people very rarely start and then use their appliances all at the same time. For our case, you would need a 3,400W generator only if you started all your appliances simultaneously.

However, in reality, you probably wouldn’t turn on all your things at once. You would need to be more intelligent when using your equipment. That is, you would want to start your appliances at different times, as well as turn off those appliances that you don’t need at the moment.

Starting appliances at different times is an excellent way of conserving energy. As we’ve found out above, you would need 3,400 watts in order to start up all your appliances. However, if starting one by one, you would only need as many watts as the most demanding appliance requires – in our case, this is the AC unit with its 1,600 watts.

This isn’t everything that you may need though. If you want to run multiple appliances simultaneously, 1,600 watts might not be enough.

Suppose you want to use your microwave oven and AC continuously without ever turning them off. When running simultaneously, they would consume 2,010 watts (1,000 + 1,010), more than what our 1,600W generator can deliver. While you will be able to start the microwave and oven separately, you won’t be able to use them together.

Furthermore, 2,010 watts would be enough to separately start up and simultaneously run your AC and microwave, but it wouldn’t be enough to use anything else!

Well, to find out how much power you need for other devices, you just need to find the appliance with the highest startup wattage among those that are left and add it to 2,010. In our case, it is the refrigerator with its 600 watts, so we get 2,610 watts.

In the end, the 2,610 watts that we get are enough to run our configuration of microwave & AC (which are always running) plus start any other appliance. In fact, if you start all the four devices one by one, 2,610 watts will be enough to run them all together since their wattage when running is 2,390!

Of course, in reality, you would need to calculate the numbers while considering your own needs, in what sequence you will be turning your devices on, and how many of them you need to run together.

Hopefully, our little example has given you an idea of how you should approach wattages in portable generators. There are plenty of intricacies that need to be considered with wattages, and we’ve composed our example in a way to cover as many of these intricacies as possible.

In our example, 2,610 watts is technically enough to run our small system, but in reality, it is often advised to have some spare watts in portable generators. The reason for this is power spikes, and in order for your RV’s circuit breaker not to trip, having a few hundred more watts can really come in handy.

If your generator has about 500 spare watts, you should be safeguarded from power spikes pretty good. However, going over 3,600 watts will probably be pointless since your RV won’t be able to make use of the spare watts, so keep that in mind.

Sometimes, it is necessary to connect two generators together to receive more power. This is a thing that can be used with 30-amp RVs, but it’s actually more useful with 50-amp RVs. 3,600 watts can be easily achieved by one generator.

Plus, keep in mind the number of generators that you want to connect. Mostly, manufacturers only allow two generators of the same model to work together, so you won’t be able to use more than two. But if you find a model that can work with two other generators, go for it if necessary.

Choosing a proper generator for a 30-amp RV isn’t too easy, but we find it exciting how much optimization you could actually put into the process.

In the end, the answer to the question “what size generator for 30-amp RV to go for?” will depend on your needs. And since there are plenty of minor details that you should consider, it isn’t a process that we can provide some very specific guidelines for.

The example we’ve described is very general, so don’t follow it blindly. Its purpose was to explain how you should approach choosing a proper generator for your 30-amp RV, and hopefully, it was clear enough for you.